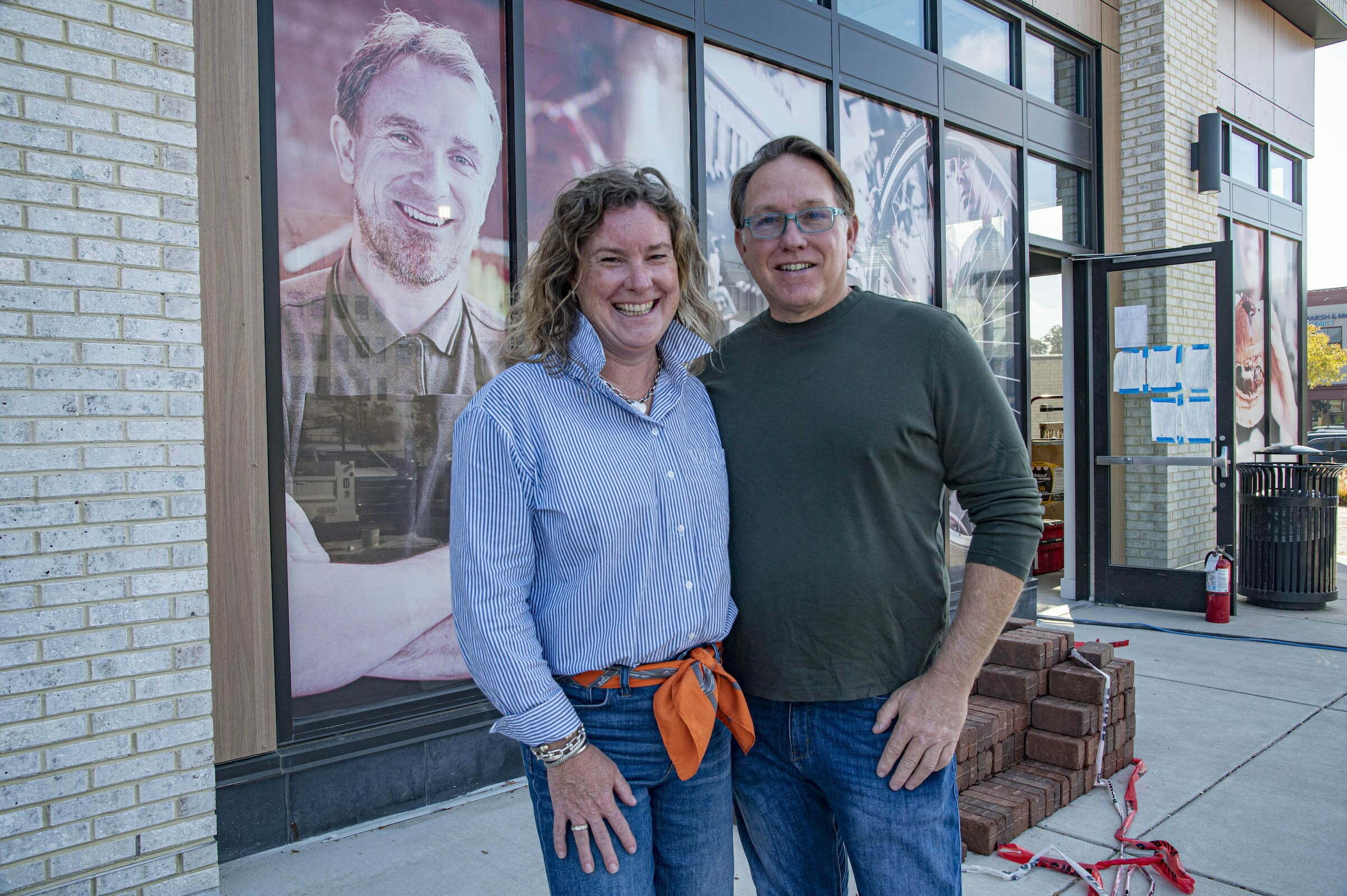 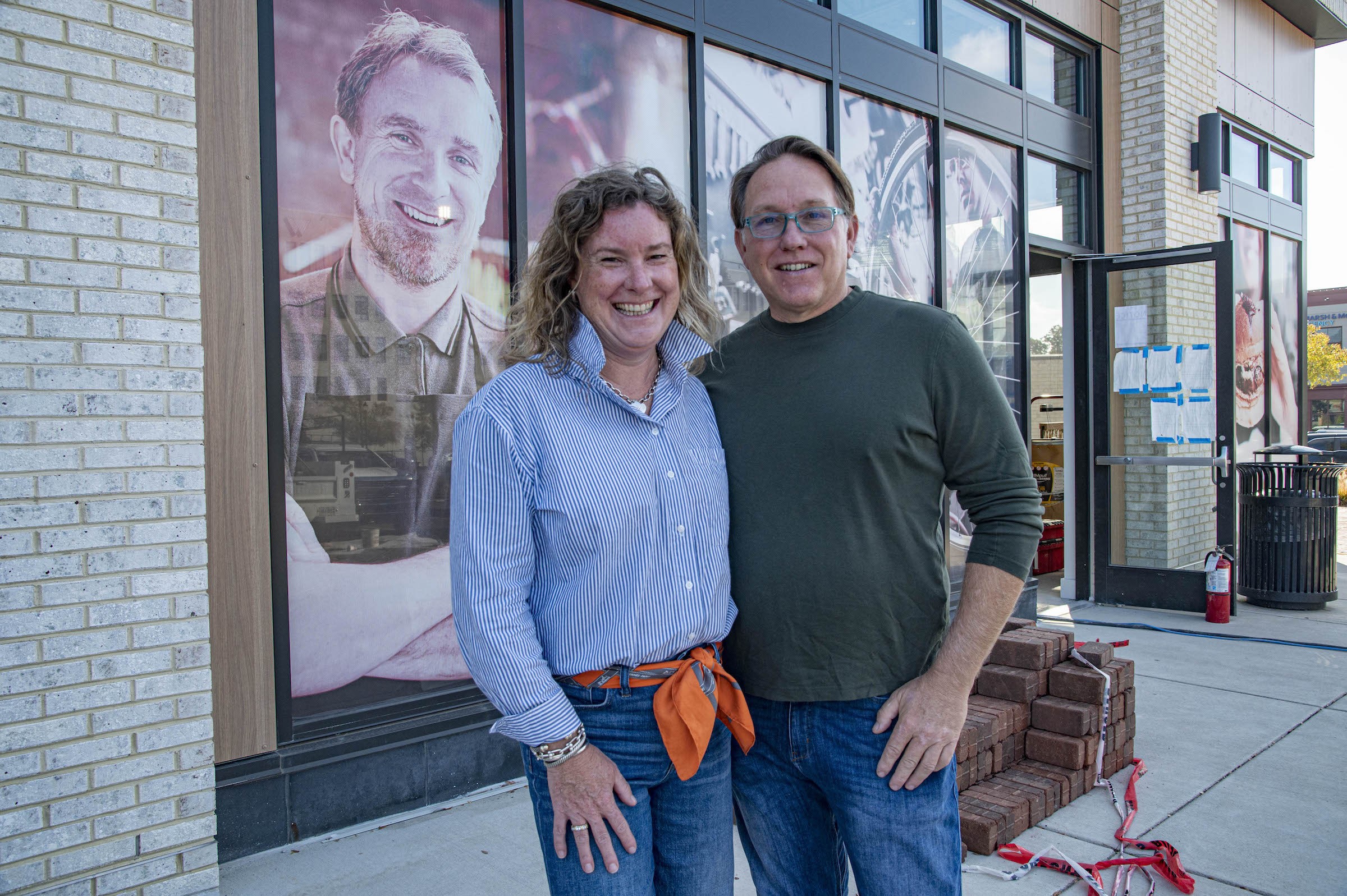 Within a year, Dale was named one of “America’s Best New Chefs” by Food & Wine magazine. At the time, he told Style: “The reception has been awesome … people are realizing that, ‘Hey, Richmond is becoming a food town now.'”

Almost a quarter century later and it’s safe to say that the River City is, in fact, a food town now.

We could wax on, dissecting the best and worst of Richmond’s ever-evolving dining scene over the past four decades.

Or we could share some insight from restaurateurs—including veterans like the Reitzers—about what it’s like to open a restaurant today, and what they hope to bring to your table.

Read on, there’s plenty to salivate about.

Sachin Mahajan says he lived in Richmond back when folks would wait “an hour” to get a table at P.F. Chang’s—a time when Mexico Restaurant was the only Mexican joint for miles around

When Mahajan learned that the old Perch spot was available, he knew he had to scoop it up, even though he and Karma chef Ajay Kumar had just opened Alexandria’s Kismet in 2021.

“Was I ready to do that? Not necessarily,” says Mahajan. “But the meaning of kismet is destiny, so I think we were destined to be there.”

Kismet will be open for dinner five days a week to start, Wednesday to Sunday, with lunch service Friday-Sunday. Mahajan recognizes that they are in a beer-heavy area (hello, Bingo neighbors) and says the bar program will focus on cocktails and wine, plus a smattering of interesting beer choices.

Mahajan says Richmond’s Kismet will be “similar” to its NoVA sister, though not a facsimile.

Diners will not find the same old curry dishes they may be accustomed to at other Indian restaurants. Instead, they can expect artful, flavorful menu items from Michelin Bib Gourmand award-winning chef Kumar like a “garden naan” adorned with scallions, micro-cilantro and mustard oil and a pretty, piquant app of “tangy,” pan-grilled sweet potatoes with tamarind sauce.

“Our focus is on creating an overall experience for diners,” says Mahajan, who worked in banking for 15 years before deciding to open a restaurant. “Banking got boring,” he laughs. “Opening a restaurant is more challenging, but also more fulfilling. We aren’t just serving food. I got in this business to really change the perception of Indian cuisine.”

It appears that Mahajan’s dedication to creating a top-notch dining experience is paying off—in a December 2021 review of Kismet, Washington Post food critic Tom Sietsema writes:
“Kismet Modern Indian delivers art on the plate in an original room at a price that’s apt to turn visitors into regulars. Mahajan says he would like to open more such restaurants. Let’s hope that’s our fate.”

This October, Lindsey opened ML Steak two minutes down the road from Lillie Pearl in the old Fatty Smokes location. “Owning my own steakhouse was always a vision,” says Lindsey, who in his prolific career has worked in the kitchen at well-known steakhouses like Ruth’s Chis and Firebirds.

It’s no wonder that the former executive chef of EAT Restaurant Partners—a company with more than a dozen concepts under its umbrella—has a penchant for expansion. But Lindsey also has a passion for each project he undertakes.

“I knew I wanted to do a cool, laid-back place that had more of a balanced menu,” Lindsey says. You can expect the requisite steaks and chops at ML, but the menu also features seafood, pasta and even a fried smoked half-chicken.

Lindsey says he also knew he wanted to create a place his entire family would enjoy, especially his mother.

“Whenever it’s time to celebrate, whether it’s a birthday, anniversary—whatever it is—if my mom is making the decision, we are going to a steakhouse,” laughs Lindsey. ML Steak is named for Lindsey’s mother—Mildred Louise (ML) Lindsey.

While Lindsey obviously endeavors to be successful across the board, he says this project needed to be a “slam dunk.” His mother’s name is on it, after all. That means the restaurateur has been spending 12-14 hours a day at ML, “old school,” and will probably ride this hectic schedule out through the end of the year.

That schedule will include adding a catering branch to Lindsey Food Group, Butcher & Bird, which will operate out of the ML kitchen. Lindsey says that Butcher & Bird will focus on barbecue—from brisket to ribs to pork butts and fried chicken, plus all the sides you’d expect—but they’ll also be able to replicate menus from other LFG concepts.

Keep an eye out for Butcher & Bird holiday packages (featuring a smoked prime rib) set to launch this winter.

ZZQ owners Alex “Orange” Graf and Chris Fultz say their brisket devotees ask all the time, “Would you ever open another ZZQ?”

Fultz assures them, “Absolutely not.” But if the entrepreneurial couple ever did think about expanding their business horizons? There is one iteration of beef that has always been on the table.

“Burgers are always something I wanted to do, who doesn’t love a good burger?” says Fultz.

Graf and Fultz will be serving a very good burger at forthcoming Eazzy Burger located conveniently between Ardent Craft Ales and ZZQ.

No booze here, but diners are more than welcome to grab a beer at Ardent and make themselves comfortable on Eazzy’s expansive, heated patio. Or bring your burger over to ZZQ and enjoy a tepache cocktail at the bar.

The three businesses not only share investors, they also share a seamless vision—serve excellent beverages, barbecue and burgers with as much fun and as little fuss as possible. Hence the name, Eazzy.

“Orange came up with the name,” says Fultz. “It just came out of my mouth,” laughs Graf. “We had bounced ideas around like ‘Rambler,’ all these different things—it took months! But when it’s right it’s right…it’s easy.”

Patrons of Eazzy Burger will be able to feel good about their dining choices, too—Graf and Fultz are making it eazzy peazzy for folks to give back to the planet.

“It starts with the beef, just like ZZQ, then the beef story impacts very single thing that happens inside this restaurant,” says Fultz. From the type of paper products they’re using to a focus on recycling and composting, they’re going to “hardcore toe the line.”

Eazzy is using beef from Roseda Black Angus Farm, a family-run operation that is, “Very focused not only on how cattle are raised, but also how the land is managed and the impacts of the genetic line of the cattle,” says Fultz. “All of the cattle are traceable back to their sires. Everyone who gets involved with Roseda, including Virginia farmers, must adhere to these strict criteria.”

“We want to make the right decision so no one else has to think about it,” says Graf. Roseda is making a special blend for the restaurant of short rib, brisket and chuck. “It’s absolutely delicious,” says Graf.

When the burger joint opens, they’re looking at lunch and dinner service from 11 a.m.-9 p.m. to start, Wednesday to Sunday, with an earlier closing time Sundays. They’ll eventually add Tuesday service and “may end up going seven days a week.” Which is perfectly fine by Graf.

“I never imagined I would be 50 years old saying, ‘I’m going to open [another] restaurant.’ I still like doing this.”

“Penny’s is almost full circle back to where our minds were in 2019, 2020,” says RichWine co-founder Kristen Gardner.

Gardner and business partner (and longtime friend) Lance Lemon launched their online wine retail shop during the pandemic but have always had a brick-and-mortar space in mind.

“Penny’s will be a place where folks can come visit us and see the wine selection and enjoy good eats from a seasonal menu by Manny [Chef Emmanuel Baiden],” says Gardner. RichWine will still be offering wine tastings for corporate and private events, and their delivery service will still bring the dopest bottles right to your doorstep.

The 405 Brook Rd. address was home to Stoplight Gelato, and will continue to be, in this new stage of life. At Penny’s, patrons can expect the same delicious gelato offerings, plus wine by the bottle and glass, small plates, coffee and a grab-and-go section. “It will be like walking into a familial dining room,” says Gardner.

She and Lemon hope to tap into the neighborhood feel of the space, drawing in families for after-school scoops, a glass (or two) for parents and cheese and sardines to-go. Those who want to linger will enjoy a “simple but delicious” menu crafted by Baiden.

“We’re definitely looking at a phased approach as far as opening,” says Lemon, who makes wine full-time. Gardner also has a full-time gig in banking, which is particularly fitting given the name of the wine bar and café.

“I live right down the street, where I’m standing right now, I can see Maggie,” says Lemon of the inspiration behind Penny’s name. “Maggie Walker’s first bank was the Penny’s Saving Bank.”

“We wanted to take something that was already here—we knew we were adding an entity to a space [Spotlight Gelato] that already existed,” says Lemon. “We’re investing in a place and historic neighborhood. Maggie’s bank was a place where people would invest their money and grow community resources.”

Lemon and Gardner are already invested in the biodynamic wines they source and the people behind the vines. Penny’s is just taking it to the next level.

“With Penny’s we’re able to tell an even deeper story,” says Gardner. “Here we will be able to pour you a glass and tell you about the wine—and pair it with food.”

Follow RichWine on Instagram to stay up to date on Penny’s grand opening as well as soft opening events. Need your vino fix now? You can always sign up for RichWine’s monthly membership, which features four Lemon-chosen bottles accompanied by a thorough background story on why each selection is special.

Projected opening: Before the end of the year

Third time’s the charm doesn’t exactly fit for the Reitzers. “Every time we have done a new space it has grown more into what we see Acacia being,” says Aline. “Dale is so seafood driven and cooks fish amazingly, so it’s just kind of taking that and evolving to the next level.”

Acacia midtown at Libbie Mill will not be a carbon copy of either of its predecessors. It won’t be a total 180, either. Diners looking for Acacia’s famed crabcakes will find them, cooked up expertly by chef Reitzer, at the new, centrally located restaurant.

But they’ll also find a brighter, more “modern coastal” elan, plus retail offerings and seafood sandwiches available during daytime hours. The name Acacia comes with its own set of preconceived notions—albeit overwhelmingly positive notions—and the Reitzers don’t want to be pigeonholed.

“When you win awards you become this destination,” says Dale. “We don’t want to fall into that trap again.”

The Reitzers are keeping it simple in this new, smaller space (about 1,000 square feet smaller than Acacia midtown). They’ll be able to seat 60-70 people inside and 20-30 on the patio. Aline says the cocktail program will be straightforward, “We don’t want to complicate it.”

The industry vets say after paving the way for Richmond independent restaurants, they know which suppliers they’re going to use and what kind of wine list they want to create.

“We don’t want someone spending 30 minutes looking at the wine list,” says Dale. “Hopefully the third time around we can limit the burdens and headaches. We’ve been there and done that and set the world on fire, those days are gone. We just want to cook good food and have fun.”