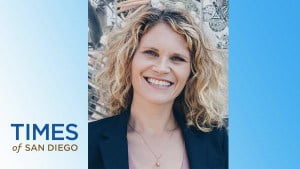 Fabienne Perlov, who on Monday assumes the position of regional director at the Anti-Defamation League’s San Diego office, brings an approach shaped by diplomacy and diversity to a high-profile organization known locally and nationally for combating antisemitism and all forms of hate.

In her first media interview pertaining to her new role, Perlov tells San Diego Jewish World: “The more we are exposed to diversity and understand our own bias, and challenge it, the better our organizations and leaders will be.”

Perlov previously served as project director at the Center for Commerce and Diplomacy within UC San Diego’s School of Global Policy and Strategy; executive director of the San Diego Diplomacy Council; and vice-chair of the City of San Diego International Affairs Board, where she advised the mayor of San Diego on international issues and promoting the city’s cultural diversity.

At ADL San Diego, she succeeds Tammy Gillies, who left the position in May.

A native of France and San Diego resident for the past 7 1/2 years, Perlov also worked for more than a decade at the United Nations and the French Office for the Protection of Refugees and Stateless Persons, providing protection and assistance to thousands of refugees and asylum seekers.

She trained a team of 30 people at the Israeli Ministry of Interior on all aspects of refugee status determination, including refugee law, how to conduct refugee interviews, and making legal decision on asylum applications.

Perlov emphasizes the importance of bringing leaders together to build community based on their commonalities over their differences.

“That’s how diplomacy works. … I’m really excited to continue these efforts at ADL,” she says, articulating her goal to build diverse coalitions.

In that regard, she notes San Diego’s status as a global player due to its proximity to the border with Mexico. Leveraging the region’s cultural diversity is “a way to build bridges between San Diego and the rest of the world, but also within San Diego,” she adds.

According to ADL’s latest annual Audit of Antisemitic Incidents, issued in April 2022, the Jewish community of San Diego County experienced 38 recorded incidents in 2021, including 14 incidents of vandalism of businesses, places of worship and schools; 23 incidents of targeted online and in-person harassment; and one incident of assault.

It came during a year of all-time high antisemitism in California, with a 27% increase in incidents from 2020.

Most recently, a teacher at Carmel Valley Middle School justified the placement of Adolf Hitler’s portrait alongside those of non-genocidal world leaders in a seventh-grade classroom, telling a Jewish student that “Hitler may have done some bad things, but he also had strong leadership qualities.”

“Images of Adolf Hitler in a classroom without proper context is deeply offensive and hurtful to members of the Jewish community…. It evokes painful, chilling memories of the Holocaust and what can happen when hatred and bigotry go unchecked,” Perlov says. “Regardless of the teacher’s intent, the impact was felt in the classroom and beyond.”

She notes that Carmel Valley Middle School is registered with ADL’s No Place for Hate program, in which it commits to fighting hatred and bigotry.

“It is my understanding that ADL is pleased with the administration’s cooperation and willingness to learn from this,” Perlov says.

Asked which arena where antisemitism rears its head is currently ADL’s highest priority — college campuses, elementary/middle/high school, other community settings, or online — she says: “I believe that antisemitism and hatred is a multifaceted problem, and as a result requires a multifaceted answer and approach. If we focus our efforts on one thing, we might miss the other areas.”

Perlov expresses the goal to double down on cultivating local partnerships, including collaborating with law enforcement, elected officials, businesses on responding to hate and building inclusive communities.

The San Diego Jewish community as well as other communities in the region, she says, “are diverse. It’s what makes San Diego vibrant and exciting, and I’m really looking forward to celebrating that diversity.”

Jacob Kamaras is editor and publisher of San Diego Jewish World, a member of the San Diego Online News Association where this story first appeared.