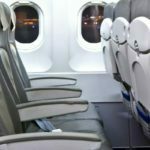 Recline one seat or lounge across two. Don’t do both. Or at least that’s the common sentiment from folks who found a recent passenger’s entitled behavior way out of line when he reclined both seats in his empty row and then laid down making it impossible for the passenger behind him to use his laptop.

The post Entitled passenger needlessly reclines both seats in his row irritating the guy behind him appeared first on C Boarding Group – Travel, Remote Work & Reviews.