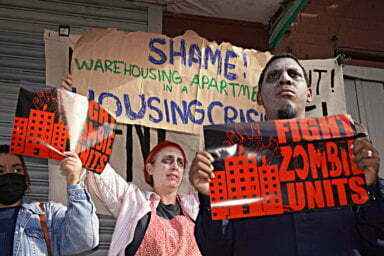 New York City is “Zombieland” when it comes to the proliferation of apartments kept intentionally vacant by ghoulish landlords looking to scare up a big profit later on, elected officials charged on Halloween.

Dubbing the empty units “zombie apartments,” Public Advocate Jumaane Williams and Manhattan City Council Member Carlina Rivera aptly gathered on Oct. 31 outside of 331 East 14th St., where tenants are undergoing a rent strike due to poor conditions. Supporters even dressed as zombies and ghouls to drive their point home about “zombie apartments” popping up across the city.

According to Williams, landlords intentionally keep these dwellings vacant in order to drive up rents and create a faux housing crisis, all the while thousands of homeless New Yorkers languish on the streets. The public advocate further charged that these undead homesteads are often in appalling conditions, negatively impact neighbors living next door.

“It can be more profitable to leave units vacant and use them as political pawns than to comply with the basic tenant protections our city and state have embraced. We cannot allow landlords to hold housing, a fundamental and basic human rights hostage for their own personal and political gain at the expense of New Yorkers suffering as rents rise amid the ongoing housing and homelessness crisis,” Williams said. “We have more units being held vacant for a political ploy than we have homeless people in the city of New York.”

Williams declared that he is exploring both city and state legislative solutions in hopes of holding these landlords accountable and to turn them into affordable housing. In the meantime, however, both the housed and unhoused are suffering.

Richie Richardson lives in one of only 11 apartments that are occupied within the 6-story building, leaving 13 living spaces empty and has joined his fellow tenants in pursuing a rent strike due to what he cites as terrible living conditions brought about by these “zombie units.”

“People were coming into the building. They were occupying apartments, and they were treating us the tenants as though we were the outsiders. We were being threatened,” Richardson recounted. “Recently we got someone who was stashing drugs in our trash room.”

Tenants told horror stories of how they have dealt with everything from theft to the pungent stench of human fecal matter, with one individual even allegedly they became stuck in the building’s elevator and had to be rescued by firefighters.

Rivera — a Lower East Side native — declared that she is fuming over the practice since she says it comes during a time when those in her district are already heavily burdened by soaring rent prices.

“Two weeks ago, the shelter census exceeded 62,000. That’s another record. And now [the] Department of Homeless Services has welcomed over 21,000 asylum seekers. What these tenants are going through right now is not new. And in April, I introduced a package of legislation called safe housing, strong communities. It’s a legislative package that includes five bills, five bills that are waiting to be passed in the city council that expands and strengthens multiple dwelling safety requirements to protect parents and families and support community led development so we can finally get more housing,” Rivera said.

Both pols toured the building following the rally, inspecting all six floors, during which the Public Advocate unveiled that this particular landlord had previously appeared on his list of the city’s worst landlords. Inside tenants had, themselves, padlocked the vacant units shut in order to prevent squatters from taking over the building.

“Let’s be clear. These are not landlords who need money, or they wouldn’t be warehousing their units. They are doing this out of greed. Greed is the driving force,” Williams said.