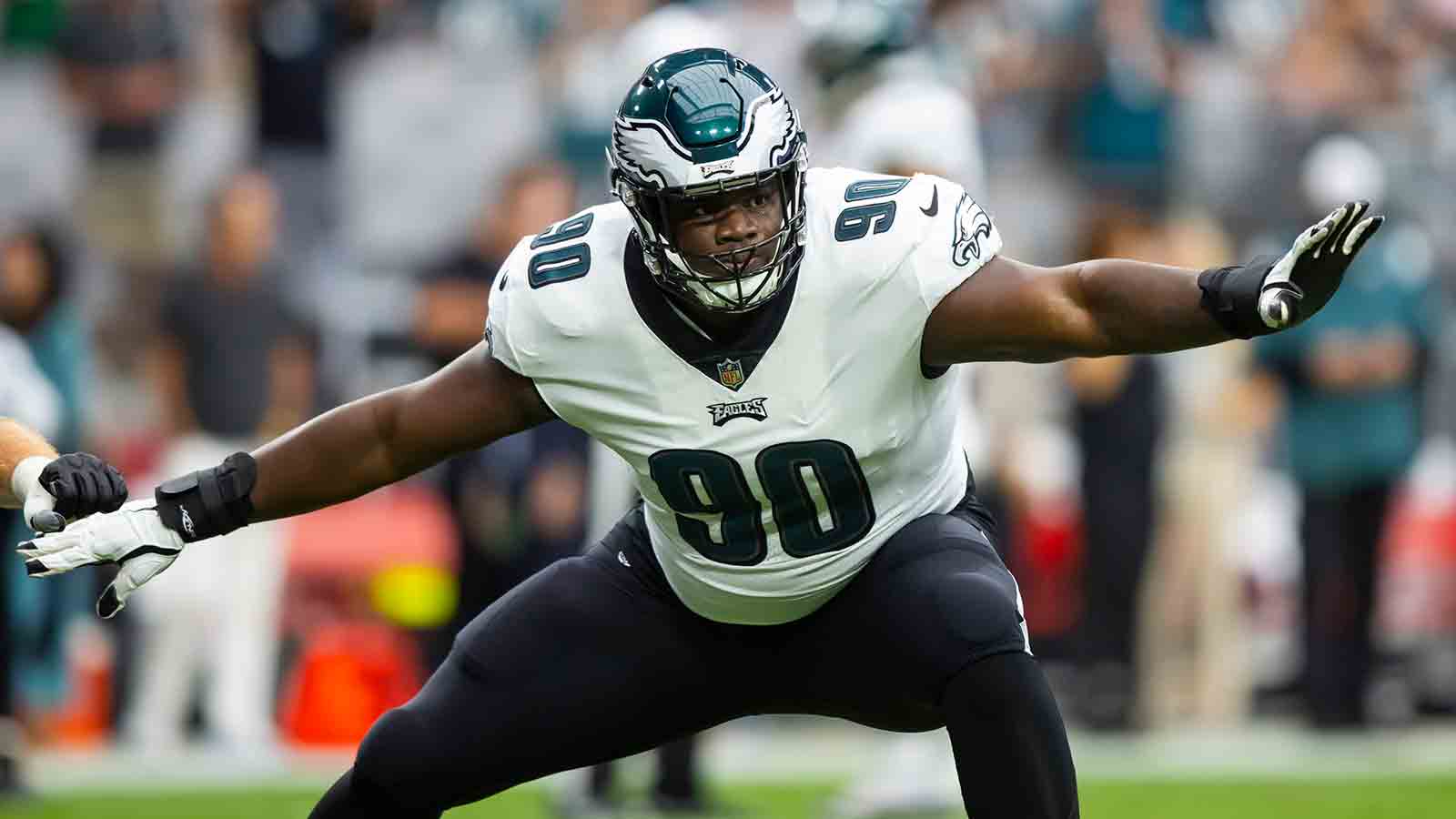 In Roob’s observations, the most intriguing thing about Eagles-Cowboys originally appeared on NBC Sports Philadelphia

A nagging problem the Eagles need to fix, what Sunday’s game means for Jalen Hurts and thoughts about Jordan Davis’s playing time.

It’s a Week 6 edition of Roob’s Random Eagles Observations as we all get ready for some Eagles-Cowboys prime-time insanity Sunday night at the Linc.

1. I can’t wait to see how Jalen Hurts plays against this loaded Dallas defense Sunday night. This is the best defense he’ll face since the Tampa playoff game, and we know how that went. Hurts is a different guy now, better equipped to dissect what a defense is doing, quicker with his reads, more accurate with his delivery, more prepared to handle the blitz. But this defense is exceptional. They’ve allowed five touchdowns all year, haven’t allowed a QB to record a passer rating of 90, have recorded 20 sacks and seven takeaways, and they just make life very difficult for even the best quarterbacks. I can’t wait to see how Hurts handles this. So far, Hurts has handled everything thrown his way. He’s got 10 total touchdowns and two turnovers. He’s won eight straight regular-season starts. He’s in the MVP conversation. But this game is different. National TV. Prime-time. Eagles’ biggest rivalry. An opponent he hasn’t beaten and hasn’t played particularly well against. A ferocious defense loaded with all-pros. If this doesn’t go well, it’s not the end of the world. This is Hurts’ 26th career start, he’s getting better every week, he just turned 24, and 5-1 isn’t a terrible place to be. But if he lights it up and leads the Eagles past a Cowboys team the Eagles have beaten twice since 2017 in a game that will determine first place in the NFC East going into the bye, then even the most ardent Jalen critic will have to finally just shut up and admit they were wrong. This game is intriguing for a ton of reasons but none more so than what it means for Hurts.

3. Last year the Eagles were the best tackling team in the NFL. This year, they’re one of the worst. According to Pro Football Focus’s tackling grades, the Eagles rank 30th in the league tackling with a 37.6 grade, ahead of only the Browns (35.9) and Jaguars (29.6). The Eagles’ weekly tackling grades this year are 29.3 vs. the Lions, 43.8 vs. the Vikings, 79.5 vs. Washington, 48.8 in the Jaguars game and 40.4 in Arizona. Not good. The biggest offenders by percentage of tackle attempts: Haason Reddick [36.4], Chauncey Gardner-Johnson [24.2], Josh Sweat [23.5], James Bradberry [23.5], Josiah Scott [22.2], Javon Hargrave [20.0], T.J. Edwards [18.4] and Avonte Maddox [17.6]. The Eagles were credited with 15 missed tackles in the opener, followed by 12 vs. the Vikings, 4 in Washington, 6 vs. the Jaguars and 11 in Arizona. Most of the big plays the Eagles have allowed this year have been the result of shoddy tackling. It should be fixable. And they seemed to be doing much better for a couple weeks before regressing Sunday vs. the Cards. Just a matter of being in position, wrapping up and getting numbers to the ball. But the fact that the Eagles’ defense has been this leaky tackling and is still allowing only 16.2 points per game is crazy. Other than the second half in Detroit on opening day and the first half against the Jaguars, this defense has been excellent. They’re top 10 in everything. If they could clean up their tackling issues, they’d be even tougher to score against.

4. Only 17 teams in NFL history have committed two or fewer turnovers through five games. Two of them are the 2022 Eagles and the 2022 Cowboys. Since 1999 – Andy Reid’s first year as head coach – the Eagles are 18-3 vs. the Cowboys when they are plus-one or better in turnover margin and 6-20 when they’re even or worse. The Eagles have won turnover margin in all five games this year, and the Cowboys have in three of five games. If you want a key to the game, there it is. If the Eagles can protect the ball and force a turnover or two – against a team that rarely turns it over – they won’t lose.

5. Part of me wants to see Jordan Davis play more, but I get what the Eagles are doing, and it makes sense. Each week, Davis is playing a little more, and each week he looks a little more comfortable. First three weeks, he got between 32 and 34 percent of the Eagles’ defensive snaps. That jumped to 36 percent for the Jaguars and then 42 percent Sunday in Arizona, which was Davis’s most productive game. Davis was a stud at Georgia and a 1st-round pick, but he’s also a 22-year-old rookie who’s still learning the NFL game, and there’s no reason to rush him. The Eagles have the luxury of rotating Davis in and out with Fletcher Cox, Javon Hargrave, Milton Williams and Marlon Tuipulotu and letting him figure this thing out at a sensible pace. That snap count is going to keep going up gradually and Davis is going to keep getting better. I would guess he’ll be in the 50-60 percent range by the end of the season. You can already see the improvement, and his ceiling is astronomical. This is going to be fun.

7. In his first two seasons, Miles Sanders had runs of 56, 65, 74, 74 and 82 yards, and his rushing average for those two years was 4.9 yards per carry. The last two years his longest run has been 38 yards, but his average for these two seasons is 5.2. That tells you how much more of a consistent runner he’s become.

8. The Cowboys have only allowed five touchdowns all year – one in each game. They’re the first team since 2006 to open a season by not allowing more than one TD in their first five games and only the 10th since 1947. They’ve allowed an NFL-low eight opposing drives into the red zone, giving up three touchdowns and three field goals. The Eagles have scored on 18 of 19 red-zone drives (not including an end-of-game kneel down), with 13 TDs and five field goals. Conversely, the Cowboys’ offense has only had 11 red-zone drives (2nd-fewest in the league), scoring on eight of them, and the Eagles defensively have been outstanding in the red zone, allowing points on an NFL-low 67 percent of opposing drives, forcing a league-high three red-zone takeaways and allowing an NFL-low 4.4 points per red-zone drive. Neither team is likely to get very many red-zone possessions. Whoever takes advantage is going to win.

9. The Eagles have two wide receivers with 350 yards through five games. The last seven years, they didn’t have any.

10. You take these stats for what they’re worth, but this is interesting: Quarterbacks who’ve made five or fewer career starts are winless in 12 straight games against the Eagles, going 0-11-1 since Stephen McGee led the Cowboys to a 14-13 win on the final day of the 2010 season after the Eagles had been eliminated from playoff contention earlier in the day. Going back to 1998 QBs with five or fewer career starts are 4-28-1 vs. the Eagles, with the other wins coming from Damon Huard of the Dolphins in 1999, Bruce Gradkowski of the Bucs in 2006 and the Vikings’ Joe Webb in 2010. Those 33 QBs have generated an average of 15.4 points per game and only one – Kirk Cousins with Washington in 2014 – put up more than 27 points. Cooper Rush? Sunday’s game will be his sixth career start.