Pro-Trump supporters storm the US Capitol following a rally with President Donald Trump on January 6, 2021, in Washington, DC.

The Justice Department, in addition to the January 6 committee, is in possession of hours of raw footage from a documentary film crew that followed Proud Boys leader Enriquo Tarrio on the day before the US Capitol riot, before Tarrio left Washington under court order, according to a source familiar with the matter.

The Goldcrest Films International crew also handed over hours of footage from January 6, 2021, including video from inside the Capitol, the source said.

According to the source, the crew picked up Tarrio from a DC jail the day before the riot and filmed all of his activities that day, including marching around the Capitol and a chance encounter with Stewart Rhodes, the leader of the Oath Keepers, who is facing federal charges, where the pair talked briefly. That video was the only meeting between members of the two groups that the filmmakers captured. 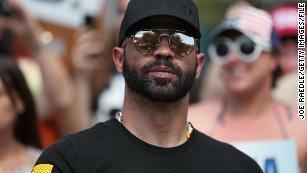 On Monday, prosecutors revealed a new detail about a meeting Tarrio had had with Rhodes and others at a parking garage in Washington on January 5, 2021.

While in the garage, Tarrio allegedly told a person that he had wiped all messages on his phone — a fact the Justice Department used this week to successfully argue he should stay in jail awaiting trial.

In the 30-minute meeting between Rhodes and Tarrio that day, “a participant referenced the Capitol,” prosecutors said in their indictment last week against Tarrio and other Proud Boys leaders.

The source who has seen the video said the footage does not reveal planning or any type of plot to storm the Capitol on January 6.

The footage was subpoenaed by the Justice Department and has been in its possession for several months. It is unclear how long the select committee has had access to the material. The film crew spent time following the Proud Boys leading up to and on January 6, 2021, and is producing a documentary on the riot targeted for release in the fall.

Goldcrest Films declined to comment on the Justice Department and House select committee having obtaining the video.

In addition to the documentary crew, freelance photographer Amy Harris was around some of the Proud Boys on January 6. She sued the committee to block it from getting access to her phone logs, and that case is in its earliest stage.