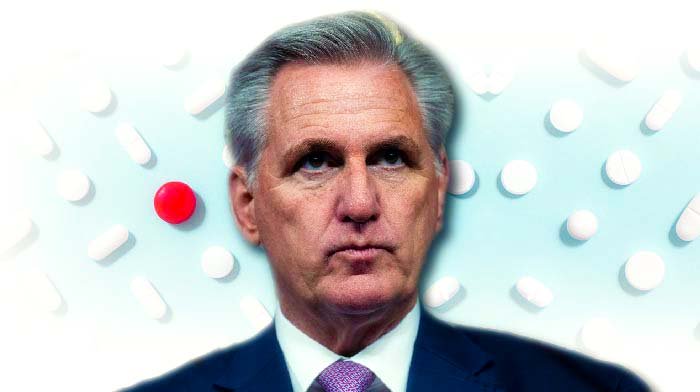 What’s happening to Kevin McCarthy? He’s out there shouting from the rooftops about the raid on President Trump. I mean, he’s really being forceful about it. Did you see the statement he released yesterday right after it happened? It was actually really strong. Meanwhile, RINOs and traitors like Dan Crenshaw and Mitch McConnell have said nothing about what happened to President Trump. Honestly, if the people of Texas don’t get rid of Crenshaw, I am seriously going to question their sanity. He’s one of the worst globalists we’ve got. But enough about Cringeshaw, let’s chat about what’s happening with Kevin McCarthy, who suddenly sounds like a real warrior, which is really weird.

And here’s his Facebook message today… this is some real MAGA/Red-pill stuff folks:

Kevin McCarthy Facebook message to GOP colleagues today: “If you are an elected Republican, and you are staying quiet while Democrats in Washington are abusing their power–you are the very reason they think they can get away with it. NOW is the time to speak up and be LOUD!”

Kevin McCarthy Facebook message to GOP colleagues today: "If you are an elected Republican, and you are staying quiet while Democrats in Washington are abusing their power–you are the very reason they think they can get away with it. NOW is the time to speak up and be LOUD!"

So, what’s going on? Well, if you ask me, it’s one of three things. Let’s talk about it. I will pose the 3 most likely scenarios and then after, I’ll tell you which one I think it is, and you tell me what you think.

I’ll start at #1. It’s a great scenario and would be a wonderful story, but sadly, I don’t think it’s true. I don’t believe that Kevin McCarthy had a “red-pill” moment. I think he’s way too establishment as it is, and will never take the plunge into the MAGA end of the pool. He might float on top, here and there, but that’s about it.

Let’s jump to #3… It’s not like I don’t think this could be in the realm of possibility, because I do, but I don’t think Kevin is quite that diabolical yet… Mitch is, but not Kevin. Do I think Kevin is aware of a plot to get rid of Trump? Yes. Do I think he’s working directly with them and playing the role of a new MAGA man to throw everyone off the scent? No… but again, I could very easily be wrong.

So, I think the actual correct answer is #2. I think Kevin is savvy enough to realize that he can’t sit back and stay quiet as he did over 2020 and January 6th, and he sees the raid as a way to weasel back into the good graces of GOP voters, and turn this into a fundraising and midterm bonanza.

Kevin wants to be Speaker of The House, so he will do whatever it takes to prove to us he’s a “fighter.”

However, he’s not the “street fighter” we need to go against these communists and win. Is he better than Mitch? Yes, but again, I might be wrong about that… these DC monsters are really slimy.

I just don’t trust these guys… what about you? What do you think is going on?