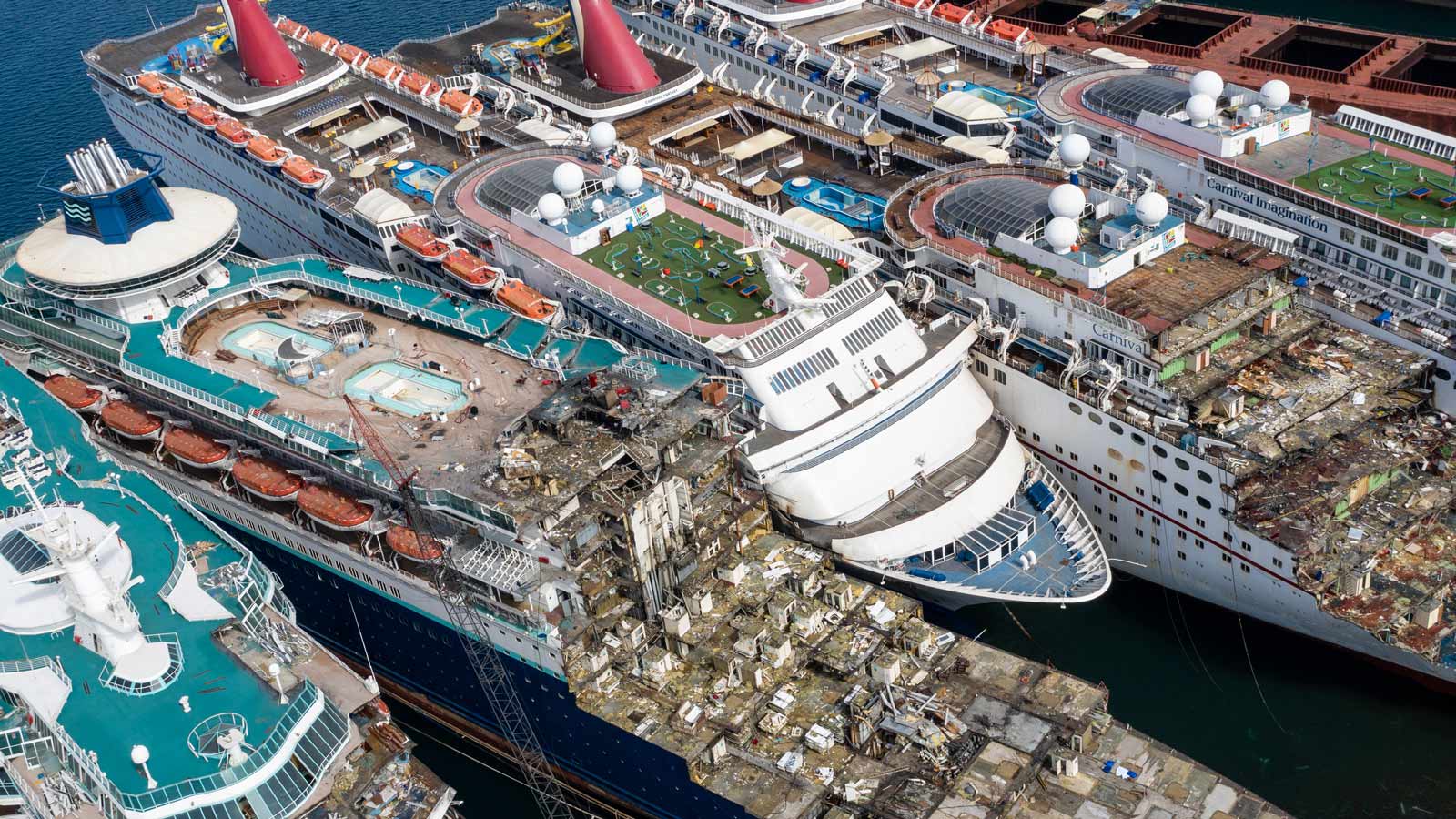 From the Australian Outback to the Californian desert, we’ve all heard about aircraft ‘boneyards.’ But where do cruise ships go to die?

In Izmir, Turkey, in a town called Aliaga, there is a ship processing centre where old cargo ships and container ships get stripped for parts, broken down and recycled. In 2020 this processing port made waves around the world when images arose of the place being used as a graveyard for cruise ships.

So: what goes on in a cruise ship graveyard? How do they recycle these giant floating beasts? In the Aliaga shipyard, they use a landing method. The way this works, according to the NGO Shipbreaking Platform, is that “the bow of the vessel is grounded on the shore while the stern is still afloat.” Then: “the blocks are… lifted by cranes onto a drained and impermeable working area.”

“The yards do not resort to the gravity method, that is, dropping blocks into the water or onto the beach.”

Steel and metal scraps are then smelted down for construction material or sold to car manufacturers. Depending on the size of each ship, each vessel typically needs a couple of thousand workers to recycle, and the process for each ship can take up to a year.

The Sun reports that the expensive navigation equipment is the first to go, along with all the furniture including beds, floors and even pianos. Emre Aras, a manager at the Aliaga yard, told The Sun cruise ships are the most difficult type of ship to dismantle “because there are hundreds of rooms on board.”

Adding to the task is that all floors, walls, handrails and windows need to be taken out. This requires plenty of saws and blowtorches.

“Massive sections of the hull are moved over head with massive cranes capable of lifting objects of 2000 tons in one go,” The Sun reports.

There are other ship graveyards in the world though, and not all of them have the same environmental and health and safety standards as Aliaga. In fact, 70-80% of the world’s de-commissioned ships are sent into India, Bangladesh and Pakistan to be stripped for parts. Turkey, where Aliaga is located, and China cover most of the remaining market.

It’s also quite rare for a cruise ship to end up in one of these places. It’s usually just cargo and container ships, because, up until COVID-19, it was quite unusual for a cruise ship line to scrap a vessel. Instead, what they would usually do is sell their old cruise ships to a smaller operater, where it would be refurbished and rebranded. However, without this option (during the pandemic), various cruise ship lines (like Carnival Cruises) started choosing to scrap some of their dormant ships.

According to Cheddar, Carnival Cruise Line, as of Jan 2021, had sold 19 cruise ships, which was 12% of its total pre-pandemic fleet. In February 2021, Cheddar adds, 6 of these ships were confirmed to have been sold to scrappers. Kamil Onal, chairman of a ship recycling industrialists’ association, told Reuters in 2020 that “after the pandemic, cruise ships changed course towards Aliaga in a very significant way.”

“There was growth in the sector due to the crisis. When the ships couldn’t find work, they turned to dismantling.”

Not all ship graveyards are the same, however. As reported in a 2014 National Geographic investigation, in Bangladesh a different process is used when shipwrecking. There, the ships are brought up onto mud flats at high tide, then cut up with soldering equipment and dragged to land at low tide. This is very dangerous work, and environmentally unfriendly.

As Muhammed Ali Shahin, a program officer at the NGO Shipbreaking Platform told National Geographic, “In Bangladesh they break 150-200 ships per year.” The documentary also claimed that in 2012, 15 shipwrecking workers died. The work is dangerous due to the hazardous (and sometimes explosive) chemicals that are released during the process, and because of the lack of safety equipment.

According to a report in Haika Magazine, “A murky world of shell companies, flags of convenience, and end-of-life flags allows companies to dodge accountability and dispose of ships cheaply.”

Although the Turkish method is safer (and more expensive) than the one used in Bangladesh, it’s not perfect. In fact, the NGO Shipbreaking Platform recommends Turkey’s landing method gets phased out.

As per the NGO Shipbreaking Platform: “The Turkish ship recycling yards apply the so-called landing method.”

Though it clearly needs to be improved upon for both the Shipwrecking workers and the environment, shipbreaking, a report by the European Commission, states, is an important service, which enables the re-use of valuable materials.

“It enables the financial viability of the shipping sector, is a major supplier of steel and is a critical part of the economy in many developing countries.”

Ship wrecking isn’t the only fate to befall out of commission, or dormant cruise ships. They have also been transformed into floating hotels, for instance, and they still, as the industry gets back to normal post-pandemic, will likely, in many cases, to be sold on to smaller operators, providing demand and travel laws get back to normal.