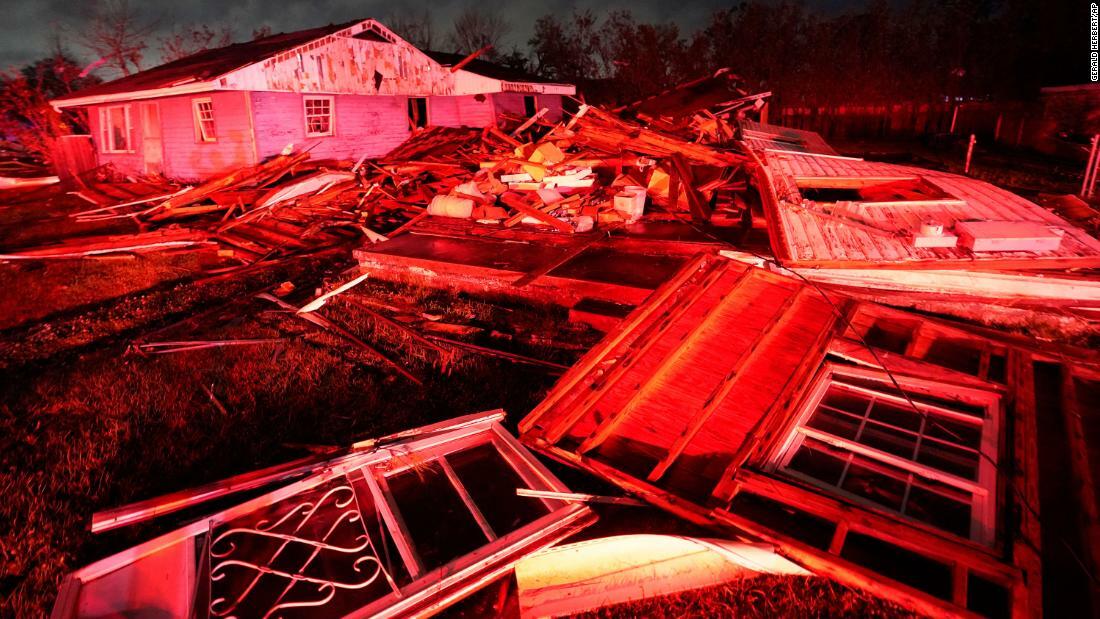 Workers and residents were picking through remnants of homes and other debris in the New Orleans area after at least two tornadoes struck the region, killing one person and leaving thousands without power.

Some houses collapsed; others were pulled from their foundations and left in streets. Roofs were ripped off others, and vehicles were overturned.

Streets and yards were littered with wood, metal and downed power lines. An overturned school bus ended up 100 yards from where it had been parked. 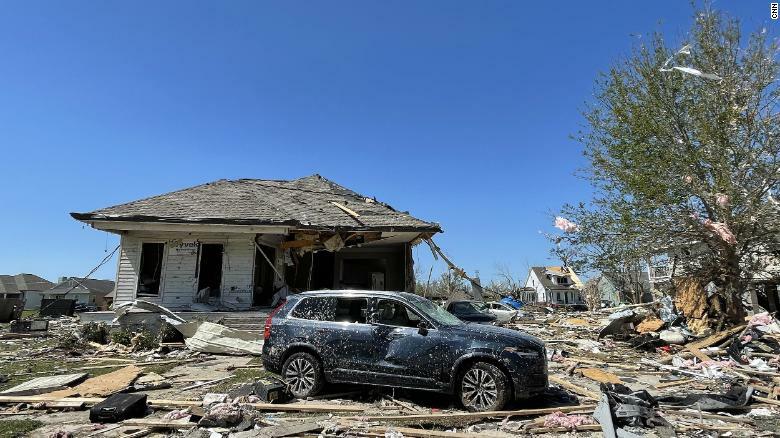 Damage in St. Bernard Parish in the storm’s aftermath

“It’s about a 2-mile stretch (of damage). … We have stretches of streets where there are no homes now, McInnis told CNN’s “New Day” on Wednesday.

“It was a miracle” that more people weren’t killed or hurt, McInnis said.

That twister had winds of at least 136 mph, meaning it was preliminarily rated at least an EF-3 on the Enhanced Fujita Scale, the National Weather Service said Wednesday. 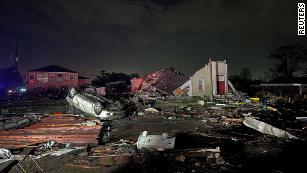 About 50 structures had some damage in New Orleans East, but no injuries or significant damage were reported in the city, officials said Wednesday afternoon.

By hitting eastern New Orleans and St. Bernard Parish, that twister touched some of the areas worst hit by 2005’s Hurricane Katrina and battered by last year’s Hurricane Ida. Workers are now focused on tornado cleanup and recovery, McInnis said.

“This parish lost more population after Katrina than any other parish in the state, especially as a percentage of the population, and these people moved back to St. Bernard, and they rebuilt,” the governor said. “They are resilient and wonderful people and that was on full display last night, the way that they were taking care of one another.”

“It’s more than people should have to bear. (Hurricane) Ida came through this area just this past August and we’re still recovering from that in many ways,” Edwards added.

A separate tornado touched down around Lacombe in St. Tammany Parish, across Lake Pontchartrain from New Orleans, on Tuesday evening, the National Weather Service said. Dozens of trees were snapped, a shed was destroyed, and some minor roof damage was reported, according to the weather service.

No reports of injuries were immediately made in Lacombe, though some homes were left without power, the parish government said on Twitter. 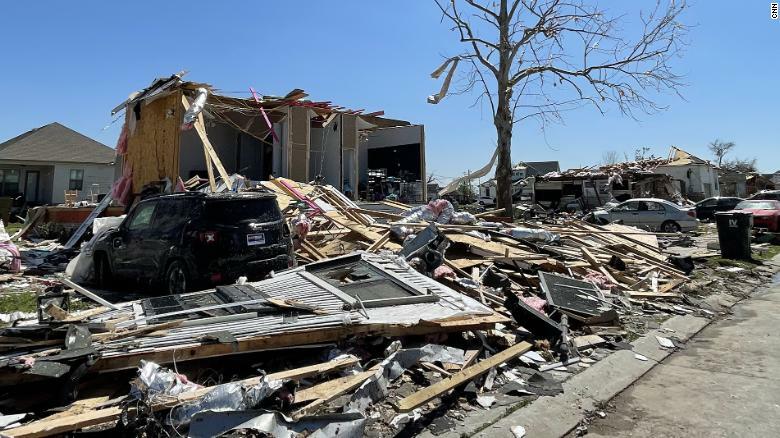 Family ducked under a mattress as tornado passed

Arabi resident Damarys Olea said she, her husband and children — ages 6 and 8 — covered themselves with a mattress in a bathroom of their house as the tornado roared through the area.

Her house was largely spared, though all the windows were blown out. Downed power lines were draped across her cars, her house and her yard.

Olea felt pressure in her ears as the tornado approached, and at one point felt like she had blacked out, she said.

“We felt the pressure, and it was scary. It was like being in a movie,” Olea said. “The wind, the pressure, the noise, the house shaking … it just felt like a train was going by.” 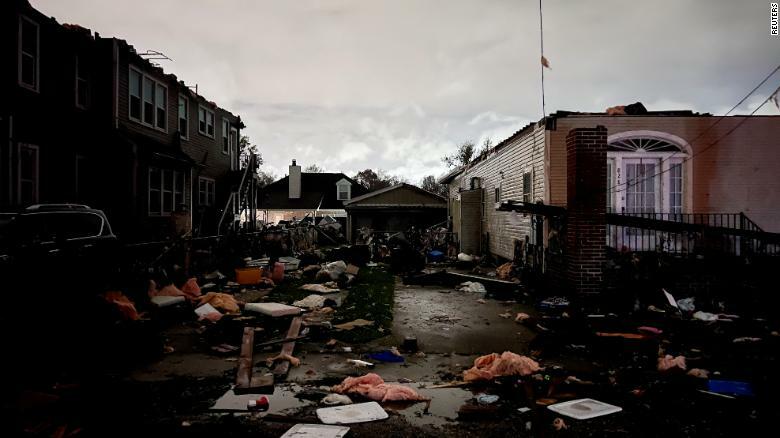 Debris is strewn across the ground in the Arabi neighborhood after a large tornado hit the New Orleans area Tuesday.

Also in Arabi, Christine Wiecek said she and her husband Rob Patchus consider themselves lucky to have ridden out the tornado in their home.

Their carport, fence and gutters sustained significant damage, and projectiles punched relatively small holes in their roof, Wiecek said. One of their cars has a smashed windshield, but both vehicles still can run.

“When the watch turned to a warning, I shut off the stove, we grabbed the cats, and went into an interior bathroom, the one room without windows,” she said. “Within two minutes, the storm was passing over us. It was really loud, the house shook, and we couldn’t stop the poor, startled cats from running around like crazy in the tiny space.”

“I was sitting on the floor with my back against the door, and could feel wind coming under the door, even though the doors and windows were closed,” she said.

The neighborhood was closed to traffic Wednesday morning, aside from emergency vehicles, Wiecek said.

“There’s so much debris that we’re not sure what’s underneath all of it yet,” she said.

Christine Wiecek’s carport in Arabi was severely damaged, but her cars still were able to run, she said.

Governor declares emergency, and thousands are left without power

A tornado also may have struck Tuesday in nearby Jefferson Parish, according to a tweet from the parish government. No reports of injuries or major damage were immediately made there, according to the tweet.

Edwards, the governor, declared an emergency Wednesday because of damage in St. Bernard, Orleans, Jefferson and St. Tammany parishes, his office said.

“Unfortunately this morning, many of our people are waking up with their lives upside down because of the tragic tornadoes last night in St. Bernard, Orleans, Jefferson and St. Tammany parishes. Sadly, one person has died in the storm, and we are praying that there are no more fatalities,” Edwards said in a news release.

More than 2,800 customers were without power in Orleans and St. Bernard parishes late Wednesday afternoon — down from more than 10,000 late Tuesday, according to PowerOutage.us. Crews were working to restore power to those impacted, Cantrell said. 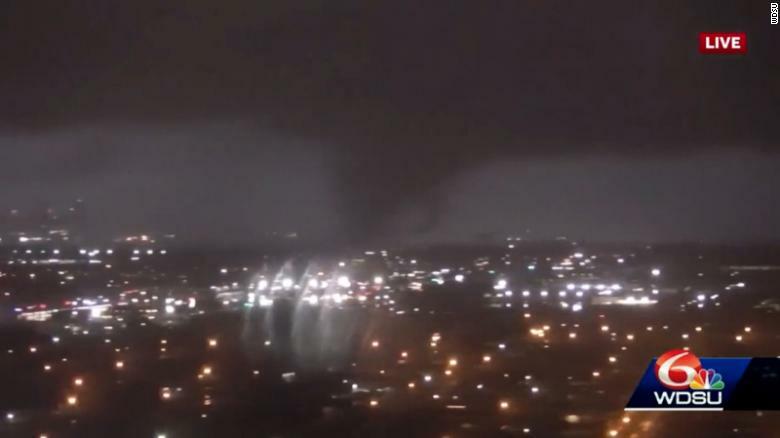 “Residents should avoid all travel that isn’t essential, to provide an opportunity for the professionals to handle this situation,” she said.

Correction: A previous version of this story quoted a purported National Weather Service official who said the tornado may have been an EF-4. The person does not work for the NWS and the rating is not confirmed.