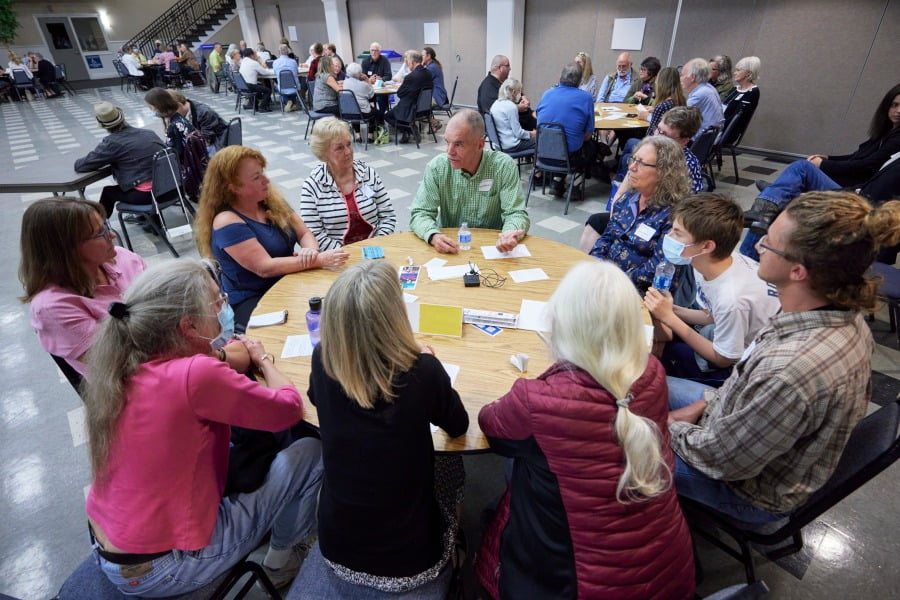 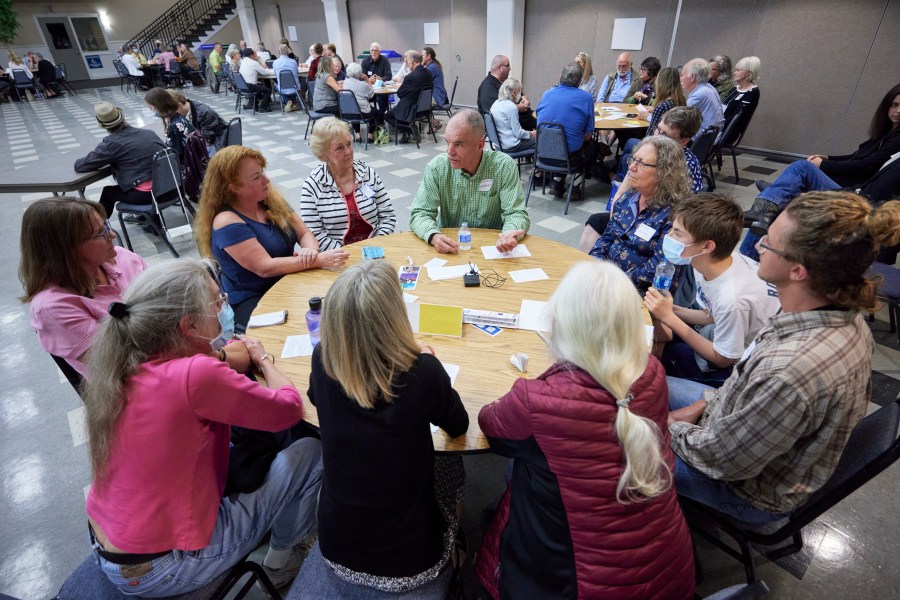 SHELTON, Wash. (AP) — Sixteen candidates for local office circled around the atrium of the municipal building on a recent night in Shelton, a logging town near the southern crook of Puget Sound. One by one, they sat at tables of inquisitive voters for what was dubbed “candidate speed-dating.”

As Auditor Paddy McGuire, a Democrat, navigated the room, he was bombarded with questions from voters, some of whom have spent the past two years marinating in paranoia about the 2020 presidential election. Were there illegal immigrants on the county’s voting rolls? What sort of surveillance was used to make sure the drop boxes where voters can deposit mail ballots are secure? Did he illegally delete election data?

One table ahead was Steve Duenkel, a retired Boeing worker and Republican who is challenging McGuire for the office that oversees elections in Mason County, population 66,000. He told voters that mail-voting, which Washington state has used for decades, was inherently risky and that they couldn’t be certain of who actually wins the election next month until there was further verification, like an audit.

A veteran election official who put off retirement this year because of what he sees as the risk Duenkel’s challenge presents, McGuire is incredulous at the campaign against him.

“It’s just hard, as somebody who grew up, as I said, believing in democratic values, that I’m being challenged by somebody who doesn’t believe that our elections here, locally or nationally, are free and fair,” McGuire said. “Particularly here in Mason County, where his party wins a lot more elections than my party does.”

Election conspiracy theorists such as Duenkel are running for Congress, governor and secretary of state positions that oversee elections in state after state around the country. But an unknown number also are running for one of the 10,000 positions nationwide that administer local elections and oversee the people who actually hand out ballots, tally votes and report results.

There are as many as 1,700 elections this year for those offices, or for positions which then appoint election administrators, according to Democratic strategist Amanda Litman, whose organization is targeting those races. That creates a dizzying patchwork of places where election conspiracy theorists can penetrate the country’s voting system.

“You’re not going to know where the vulnerability will be,” said Litman, whose group Run for Something has announced an $80 million effort over three years to recruit and support Democratic local election officials. “They can come from any direction, in any state.”

Conspiracy theorists who parrot former President Donald Trump’s lies about the 2020 election already have made inroads in local election administration. In Macomb County, Michigan, the office hired someone to recruit poll workers who had protested against Democrat Joe Biden being declared the state’s presidential winner. In Nye County, Nevada, the county commission pushed for the election office to hand-count ballots rather than use more reliable machines, leading one clerk to quit — only to be replaced by someone who falsely contended that Trump won the election two years ago.

The most prominent example is in western Colorado’s Mesa County, where Republican clerk Tina Peters faces multiple felony charges for her role in an alleged illegal download of voting machines’ data — data that ended up on election conspiracy theory websites.

Peters has pleaded not guilty to the charges and contends she is the victim of political persecution. She’s not charged with the actual download and distribution of the data from a voting machine, which was technically not a crime in Colorado at the time. The Democratic Legislature made it one in a voting bill inspired by the case.

During the speed-dating forum, McGuire warned that the number of Peters-like election deniers running for local auditors in the state may mean the Legislature there needs to adopt a similar measure to make it a felony. Duenkel, in contrast, sponsored a local screening of a movie made by Trump supporters that portrays Peters as a heroic whistleblower.

Reached by phone before the forum, Duenkel told a reporter he was “busy” and hung up. He did not respond to text messages afterward.

The two are the only men running for Mason County auditor, the local position that oversees elections. Due to the state’s unusual top-two primary system, the county’s voters already cast ballots for each of them in a head-to-head contest in August, with both advancing to the November election.

McGuire finished ahead of Duenkel, but by only 308 votes.

Just around the southern arm of Puget Sound from the state capital of Olympia, Mason County is the sort of largely rural community that was once solidly Democratic and is now increasingly Republican. Trump won it twice, besting Joe Biden by 4 percentage points there in 2020.

The cavernous lumber mill that looms at the end of Shelton’s modest downtown was once locally owned and filled with nearly 1,000 union workers. It has since been bought by a multinational corporation and employs fewer than a-third of its original workforce. Much of the county’s aging population lives outside town, in scenic nooks and crannies tucked into the evergreens.

An Olympia native, McGuire moved to Mason County from Washington, D.C., in 2014, planning to retire to a house surrounded by five acres of forest on a wooded peninsula. He had worked in Democratic politics in Oregon in the 1990s before bailing out of the campaign world and becoming Oregon’s deputy secretary of state in 2000. He helped the state become the first in the nation to send every voter a ballot in the mail. He later went to Washington to help run the Pentagon’s mail voting program for military personnel stationed overseas.

But in 2018, the county’s auditor decided to retire, and asked McGuire if he’d run for her spot. He did and won with little controversy. He moved into an office on the second floor of the county building where he kept a collection of voting memorabilia, including a vial of chads from the disputed 2000 Florida presidential election.

Then came the pandemic and Trump’s reelection campaign. The president cast doubt on mail voting, which is universal in Washington, and began to claim the election was being stolen from him before voting even finished. Citing the pandemic, McGuire limited the number of observers of the vote count in the 800-square-foot county voting office. He installed a video feed so people could watch remotely, but that didn’t satisfy his critics.

“Voting, to me, is one of the fundamental rights of an American citizen,” said Lindy Martinez, a retired cook. “If somebody is going to make it feel, like it is or isn’t, like you can’t see” how your vote is counted, she said, “then where’s my rights?”

As Trump falsely protested his loss with rumors and vague allegations that would fuel the Jan. 6 assault on the U.S. Capitol, Martinez became more suspicious that something untoward had happened in her county. She joined a group called the Mason County Voter Research Project that went door to door, checking whether voters who cast ballots in 2020 actually lived where they were registered.

The group was headed by Duenkel. It issued a report claiming that it found 441 “anomalies” in the voter rolls, including possible votes by a dead person. But McGuire said the vast majority of the cases the office knew about or were simply erroneous. Only about 67 of the 44,000 voters had possible issues. A Seattle television station retraced the group’s steps and found numerous errors in its report, including the allegation that a dead person voted.

At one of the first tables he sat at during the “speed-dating” event, voters challenged Duenkel about the television station’s report.

“They disputed some of the findings, but in the end they had to agree there were some things that couldn’t be explained,” Duenkel said.

The issue dogged him as he moved around the room.

“It feels like you’re talking about pocket change,” Chris McGee, a 63-year-old retired carpenter and self-identified liberal, told Duenkel when the candidate touted his door-to-door investigation.

“Small numbers matter,” Duenkel shot back, noting that a recent city council race had been decided by five votes. ”Think of it as if it were your bank account, and your bank said, ‘Fifty dollars, what’s the big deal?'”

Duenkel repeatedly told voters he was not claiming “fraud.” But, at one table, after Duenkel described the purported “ghost voters” he said his door-knocking had uncovered, Marisa Kaneshiro, a legal assistant, responded incredulously, “You just alleged fraud right here!”

Another voter dropped in front of the candidate a copy of the local weekly newspaper with the headline “State Rebuts Duenkel Claims.”

At one point, Duenkel seemed to argue that repeated wins by Democrats in the reliably blue state were partly responsible for conservative skepticism about voting.

“There are a lot of people who have lost confidence” in election security, Duenkel lamented. “They are seeing outcomes they don’t believe in.” That, he added, “is a subtle form of voter suppression.”

McGuire faced pushback from voters, as well. At one table, several voters asked about security surrounding drop boxes — only one in the county has a video camera filming it. McGuire argued that the existing sensors, like motion detectors, were as good as they could do right now. Minutes earlier, Duenkel had earned nods and smiles criticizing drop box security.

“I’m not excited about drop boxes, I think that’s fodder for misuse,” Leslie Skelly, a 75-year-old retired restauranteur and a Republican at the table said afterward. He added that “I liked them both,” but is leaning toward Duenkel.

Other voters at the table slammed McGuire over limiting observers during the 2020 count.

“I am proud of the fact that none of my staff got sick,” he said.

At a final table, one woman confronted McGuire, unspooling a complex, jargon-laden story about a voting machine update after 2020 that she claimed deleted election data.

“Why haven’t you told the people about the deletion of the web activity logs?!” she demanded as the moderators rang a cowbell, signaling the candidates had to move to the next table.

McGuire seemed baffled by the charge. “Well, you know about it,” he said as he left.

Beanpole thin and gregarious, McGuire chatted amiably with attendees long after the event finished. Duenkel, more compact and soft-spoken, in a navy suit without a tie, shook several hands but left sooner.

Outside the building, Barbara Weingarden, a 51-year-old dietary worker who described herself as politically “non-denominational,” said she was confused by Duenkel’s intimations of voter fraud.

“Steve was bringing that in from Seattle, or other metro areas,” she said, adding she was sure there was no cheating in her county. “We’re a small community.”

Associated Press coverage of democracy receives support from the William and Flora Hewlett Foundation. The AP is solely responsible for all content.

Check out https://apnews.com/hub/explaining-the-elections to learn more about the issues and factors at play in the 2022 midterm elections.