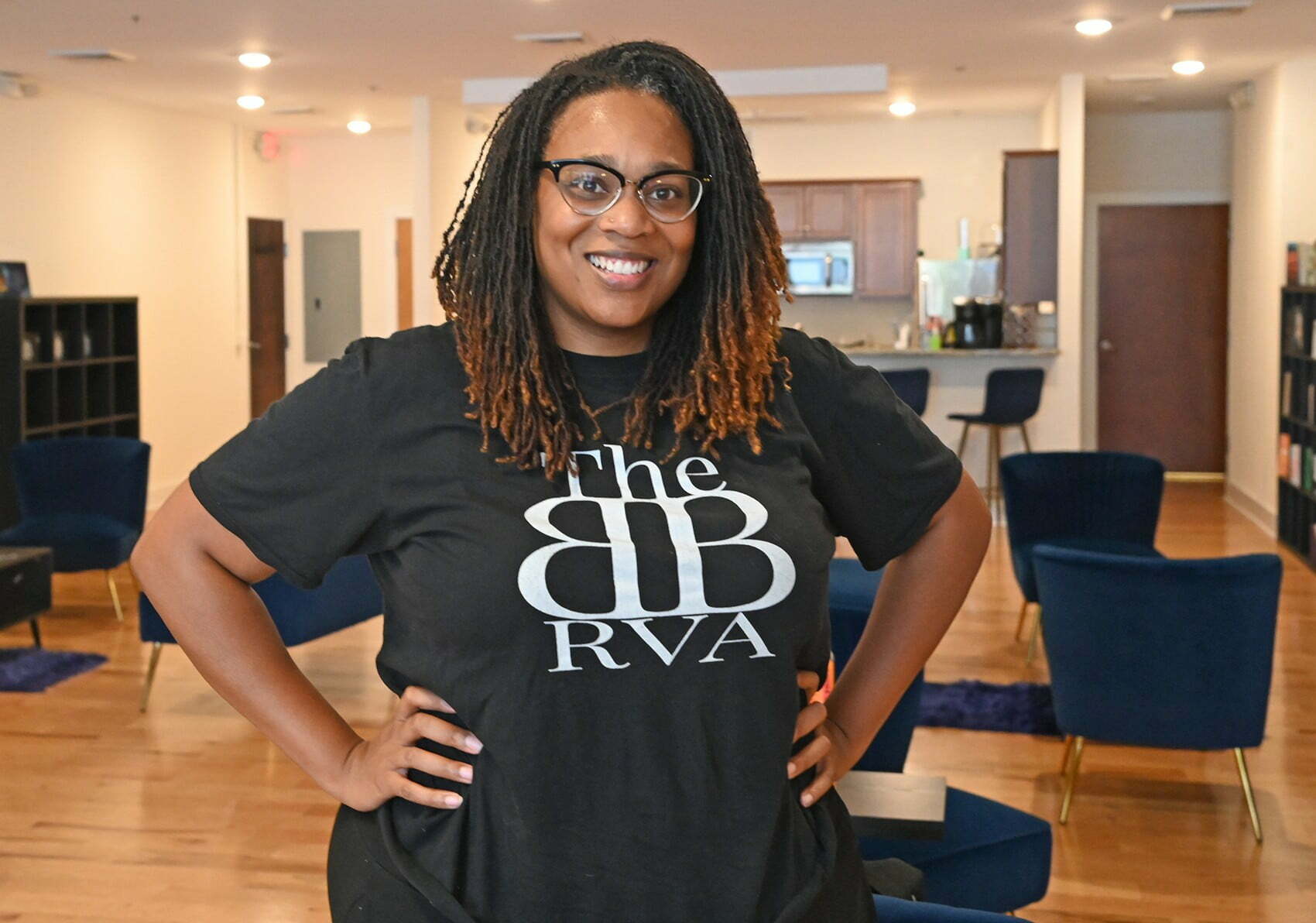 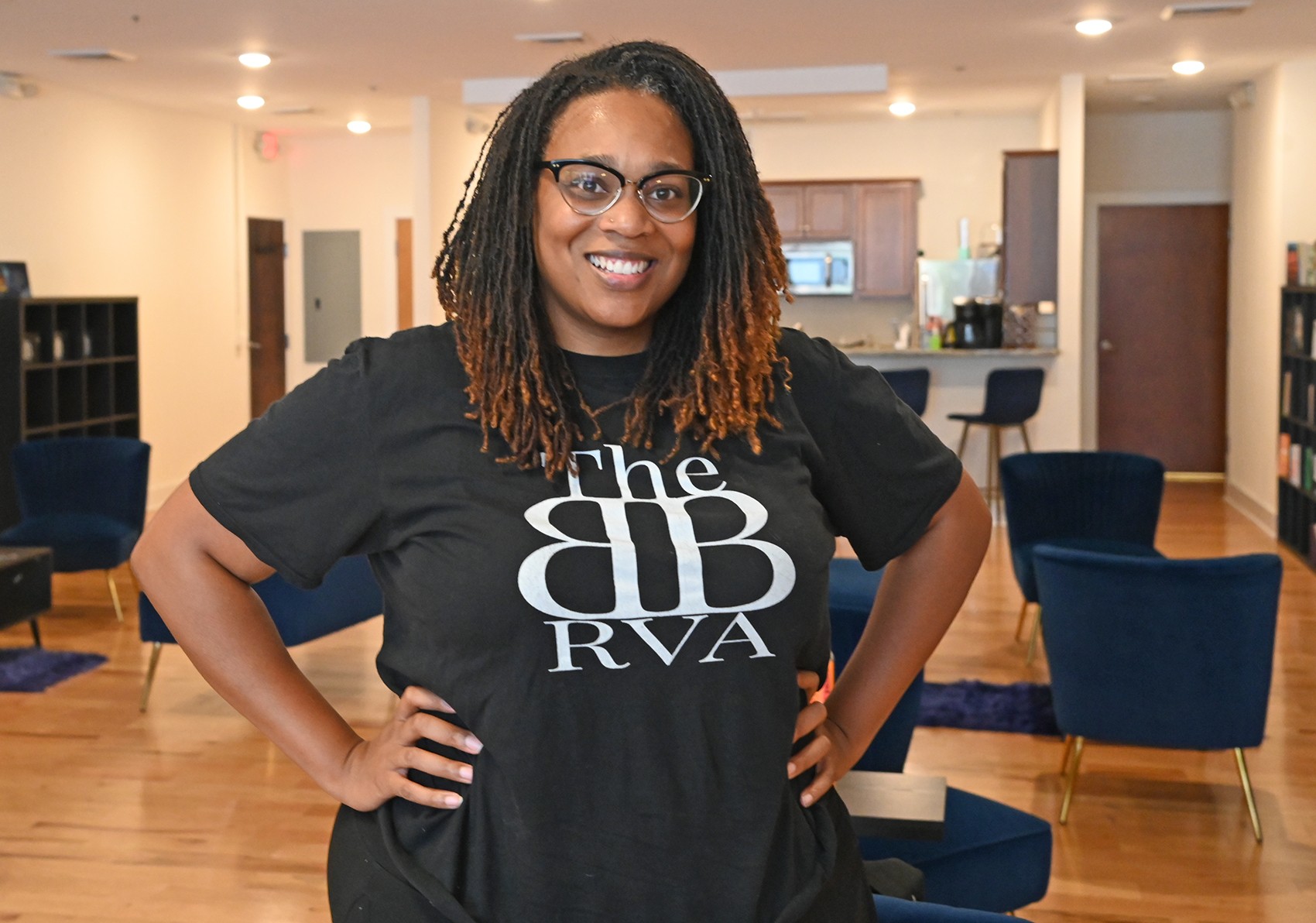 How a Richmond bookstore that is focused on BIPOC authors could be part of a growing trend.

The psychological counselor and avid reader is a fan of Black authors.

But she noticed that titles by them were typically only displayed in bookstores during Black History Month and then quietly removed. “Seventy to 75% of published authors are white,” she says.

So, she decided to do something about it. In February, she opened The Book Bar at 1311 E. Main St. in downtown Richmond. The cozy shop features books by authors who are Black, indigenous and people of color, and is the only independent store of its kind in the area.

“Black and brown authors are hard to find,” she says while sitting in one of the plush, dark blue chairs arranged in the store, which is located inside an older brick building.

It’s a cozy place and Dandridge also has an ABC license to sell wine by the bottle, so customers can take their time perusing the shelves and reading. Light food is also available.

The store is not only inviting, it’s also evidence of what seems to be a larger trend. After years of being slammed by retail giants such as Barnes & Noble and primarily Amazon, independent bookstores are enjoying a revival of late.

A report published last year by Harvard Business School Professor Ryan Raffaelli showed that from 2009 to 2018, independent book stores in the country increased by nearly 50% – from 1,657 to 2,470.

Dandridge and others believe that the growth is due to readers’ wishes to patronize stores with closer ties to their communities, while including more of a say in what they sell.

Another factor could be the COVID-19 pandemic, with more people staying home and reading.

Retail behemoths such as Amazon, which actually began as a bookstore, have strong advantages from market power and data-driven decision making to the ability to take most any orders online and ship within a day. But Dandridge notes that independent stores can do the same thing. One place to start is Bookshop.org, a site that can guide you to a store and list titles, she says.

As far as what she offers in The Book Bar: “I like to try a little of everything – mysteries, thrillers, fiction, graphic novels, comic books, children’s books.” Her favorite genre is fantasy writing.

She carries familiar Black writers such as Toni Morrison and also sells “A Place Inside of Me: A Poem To Heal the Heart,” by Zetta Elliott. Another item is by anti-racist activist, Ibram X. Kendi, whose penetrating views touched off current debates about critical race theory, which outlines the impact of systemic racism in society.

Kendi’s ideas are at the heart of arguments about what is being taught and read in schools. It is such a hot topic that Gov. Glenn Youngkin, a Republican, made the issue a key part of his campaign last year to clamp down on speech and teaching in classrooms. He has proposed setting up a “hotline” so concerned parents and others can report what they consider to be errant teaching and discussion.

Another trend is schoolbook censorship. Throughout Virginia and the country, more schools are reviewing what books are on course curricula and in the school library. Bedford County schools, for instance, will email parents what their children are taking out of the library.

Yet another controversial work has proven to be the highly awarded novel, “Beloved,” by Toni Morrison. The 1987 book deals with a formerly enslaved family just after the Civil War. It won both a Pulitzer Prize and a National Book Award but has been criticized by some parents for its sex scenes. “Toni Morrison is at the top of the list,” Dandridge says.

She gets books for the shop from publishing houses, smaller regional ones and some self-published work.

“There are lots of regional presses,” says Dandridge, who is originally from New Jersey and moved to the Richmond area in 2008. She has a doctorate in psychology as well as a counseling practice. The Book Bar is open Wednesday through Sunday.

Getting published, especially by the large printing houses, is tough and Dandridge says it is even harder if the author is Black. A 2019 study by children’s book publisher Lee & Low Books and Boston University showed that 76% of authors identified as white. That’s down from 79% previously. Only 5% identified as Black.

Charlottesville author, Jocelyn Nicole Johnson, had one of the most acclaimed debut books in the country this year with “My Monticello.” The book of five short stories and a novella is being adapted into a Netflix film and currently is a finalist for the Library of Virginia’s 25th annual literary award for fiction [full disclosure: Style Weekly’s editor and Johnson are friends from their undergraduate days at James Madison University and she is married to one of his former housemates].

It could get even tougher for Black authors, at least among the big publishers. Penguin Random House and Simon & Schuster announced plans to merge in 2020, with critics speculating it will only further impact minority authors. A judge is now weighing the Justice Department’s antitrust bid to block Penguin Random House’s proposed acquisition of its rival, according to an article in the Wall Street Journal.

National Public Radio explored the issue recently and quoted writers, the Authors Guild and other sources. It interviewed Saira Rao, a Richmond-based author and politician who is South Asian American. She agrees that the merger will negatively impact minority authors.