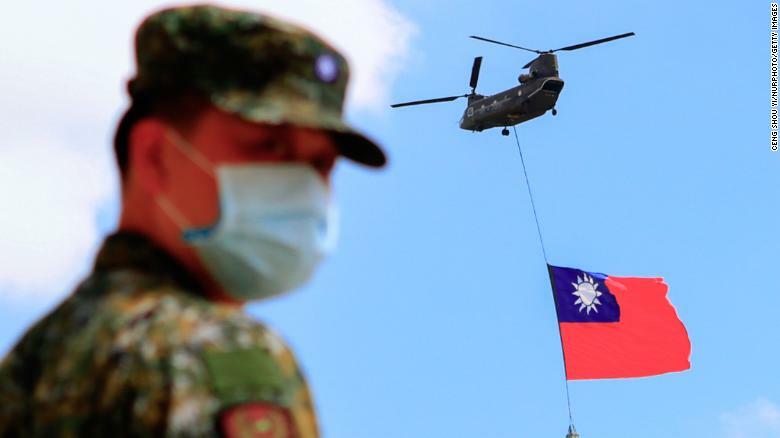 Hong Kong (CNN)As the world’s attention focuses on the escalating crisis between Russia and Ukraine, a spotlight has also been turned on an island halfway around the world — self-governing Taiwan.

On the surface, there may be parallels: both Taiwan and Ukraine are Western-friendly democracies whose status quo could be upended by powerful autocracies.

In Taiwan’s case, China’s Communist Party seeks eventual “reunification” with the island it claims as its territory despite having never governed it — and has not ruled out doing so by force. For Ukraine, that threat is unfolding: Russian President Vladimir Putin has said he considers Russians and Ukrainians as “one people,” and it’s yet unclear how far he’ll go to realize that claim — on Monday he declared two breakaway, Moscow-backed territories in Ukraine as independent republics.
World leaders themselves have implied connections between the fates of Ukraine and Taiwan in recent weeks.

Taiwanese President Tsai Ing-wen has said Taiwan could “empathize” with Ukraine’s situation given its experience with “military threats and intimidation from China.”

In the West, British Prime Minister Boris Johnson on Saturday said “echoes” of what happens in Ukraine “will be heard in Taiwan,” while US Secretary of State Antony Blinken on a trip to Australia earlier this month obliquely said “others are watching” the Western response to Russia, “even if it’s half a world away in Europe.”

Concerns have been rising in recent years that a confident China under leader Xi Jinping may make a bold move to take control of Taiwan, and Beijing will likely be carefully monitoring the situation in Ukraine for signs of how Western powers respond — and just how severe those responses are.

The United States, the United Kingdom, the European Union, Canada, Australia and Japan have all announced economic sanctions to punish Moscow following Putin’s moves earlier this week.
But there are limits to the parallels, and to how much Beijing could glean from the spiraling crisis in Ukraine when it comes any future actions toward Taiwan.

“How the US responds to Ukraine is not going to be the same as Taiwan because the way the US has constructed its relationship with Taiwan over decades is different than its responsibilities to Ukraine, the European Union, or NATO,” said Lev Nachman, a postdoctoral research fellow at the Harvard University’s Fairbank Center for Chinese Studies.

“Even though (Beijing) will still be watching closely to see how the world reacts to invasion and a potential redrawing of borders, which will likely factor into Beijing’s own geopolitical calculus, it is highly unlikely that Beijing is going to drastically alter its strategy towards Taiwan over Ukraine,” said Nachman, who focuses on Taiwan politics.

Similarly, experts have pushed back at the notion that the US’ focus on Europe could provide a potential opening for China to make a move on Taiwan. These fears are seemingly compounded by Moscow’s increasingly close ties to Beijing.

“I don’t believe the Chinese would use force against Taiwan this year … (Xi) doesn’t really want to take any risk,” said Steve Tsang, director of SOAS China Institute at the University of London, pointing to the Communist Party National Congress, due to be held in October, in which Xi is widely expected to to secure a historic third term in power.
“A military adventure that is not successful will not do his third term of office much good, and a failure could potentially derail it,” Tsang added.

The unique US-China dynamic also complicates any attempt at comparison between Ukraine and Taiwan. China is the US’ most formidable long-term rival and the only country that can challenge US interests across domains and around the world, said David Sacks, a research fellow at the Council on Foreign Relations in New York.

“If China were to gain control of Taiwan, this more than anything else would help it establish regional hegemony. Chinese leaders understand that to the United States the stakes are different and its response would likely be very different,” he said.