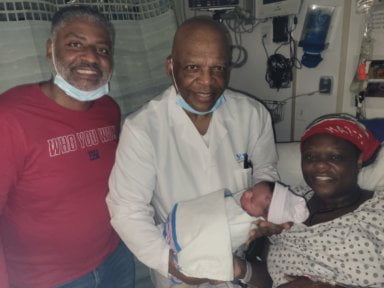 Congratulations are in order to Brooklyn Democratic Party Chair and Assemblywoman Rodneyse Bichotte Hermeleyn and her husband Edu Hermelyn, who last week welcomed their first child into the world.

Daniel Jean-Jacques Hermelyn was born at 9:43 a.m., Thursday, Oct. 6, weighing in at seven pounds three ounces and 19 inches long at the Wyckoff Medical Center in Brooklyn.

Bichotte Hermelyn said Daniel was named after the doctor who delivered him – Dr. Daniel Faustin, who like the Hermelyns, are Haitain-American. In addition, Bichotte Hermelyn, said in naming her son, she thought of two Jewish-American physicians.

“One [Daniel] was my reproductive doctor who helped me for many years. And the other one was a doctor who took care of my mom at the Borough Park Rehab Center,” said Bichotte Hermelyn. “The name also comes from the biblical Book of Daniel. As you know, Daniel came out of the lion’s den having faith so nothing happened to him. The Book of Daniel is also known to be the book of kings. So there is a lot of meaning there.”

It is the second child for Bichotte Hermelyn, whose first son, Jonah, died tragically hours after he was born.

As an Assemblywoman, Bichotte Hermelyn has been a leading proponent of maternity-related legislation. This includes introducing landmark Maternal Health Care Legislation last year that helps prevent pregnancy loss, and the enacted 2020 Jonah Bichotte Cowan Law – named after her late son – and which establishes requirements for treatment when an expectant mother presents at a general hospital with concerns about being in pre-term labor.

Bichotte Hermelyn and the little Daniel Jean Jacques are both home now and reported in fine health.