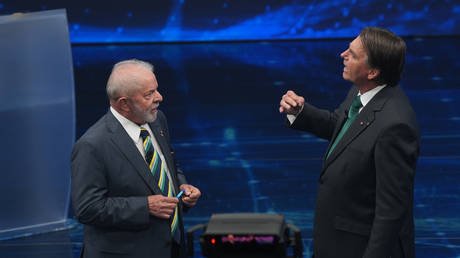 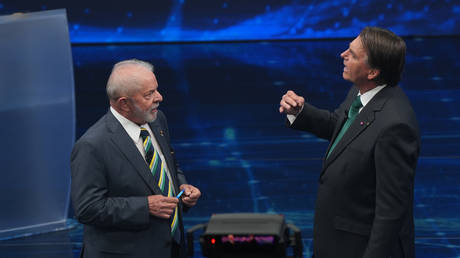 Lula labeled his opponent “the king of fake news,” while Bolsonaro called him “a national embarrassment”

Brazilian President Jair Bolsonaro and his left-wing rival, Luiz Inacio Lula da Silva, accused each other of incompetence during the first televised debate on Sunday, ahead of the second round of the presidential election. They also resorted to character attacks.

Lula da Silva, commonly known simply as Lula, accused his opponent of allowing the destruction of the Amazon rainforest, as well as mishandling the Covid-19 pandemic and downplaying the dangers of the virus.

“The numbers are there. You are the king of fake news, the king of stupidity [who] lies to Brazilian society. You lied about the vaccine. And Brazil has the reputation of the country with the most deaths from Covid,” Lula, the frontrunner in the race, said.

“Never before in history was there a government that fooled around with a pandemic or with death as you did.”

Bolsonaro defended his record, saying that the government “brought 500 million doses of vaccine.”

“Brazil was an example to the world in terms of vaccination,” he said. “Less than a month after the first dose was administered in the world, Brazil started [its campaign]. And all vaccines were brought in by the federal government. We are proud of our work.”

Bolsonaro vowed to defend conservative values against “gender ideology,” adding that “we don’t want our children in school to use the same bathroom [regardless of sex].”

During the debate, Lula called Bolsonaro a “tiny little dictator” and pledged to defend freedom and democracy. The incumbent fired back, calling Lula “a national embarrassment,” due to the corruption scandals that took place when Lula’s Workers’ Party (PT) was in power between 2003 and 2016.

Lula, who governed Brazil from 2003 to 2010, was barred from running for president in 2018 because of a corruption conviction that was later overturned. He is ahead of Bolsonaro with 49%, according to a poll by Datafolha that was released on Friday, which has Bolsonaro at 44%. The vote will take place on October 30.