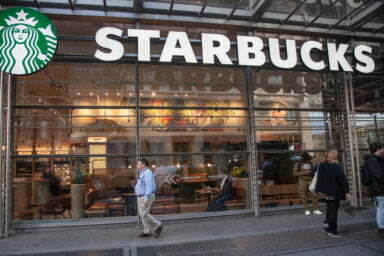 An experimental automated Starbucks store in Midtown has its workforce blowing a fuse over what new uncompensated responsibilities.

Workers at a recently opened high-tech Starbucks and Amazon Go hybrid store on Eighth Avenue under the New York Times building responded to the new work responsibilities at the location by filing a petition for a union election with Starbucks Workers United.

The store molds together a Starbucks cafe with an Amazon Go market that houses a cashierless system to track customer’s purchases from entrance to exit using dozens of cameras and sensors.

The futuristic store is an example of the coffee chain testing new automated technology — a direction that Starbucks’ corporate leadership has described to investors as a “pillar” of the company’s reinvention plan.

But in the Manhattan hybrid store, which opened in July, the tech intended to make the customer experience as frictionless as possible has come with increased responsibility for staff — responsibility that they believe they should be compensated for.

“We’re employed by Starbucks, but we don’t get paid by Amazon for doing Amazon work,” said Aaron, a worker at the midtown store who asked to be identified by his first name to avoid professional backlash.

Workers say that they decided to pursue unionization when they realized the store’s automated features required employees to go through additional training and take on new responsibilities without any extra pay.

Some workers said Starbucks gave them no choice in transferring into the store, according to Workers United.

In response, Starbucks said that it does not support the unionization effort. “We are listening and learning from partners in these stores as we always do across the country. From the beginning, we’ve been clear in our belief that we are better together as partners, without a union between us, and that conviction has not changed,” said a Starbucks spokesperson.

The front of the Midtown store is a small coffee bar where a group of baristas prepare drinks walled off from customers behind a wicker barrier. To get past a gated Amazon grocery store and lounge area to sit down or get food, customers have to insert their credit or Amazon card, which triggers an automated system to track their movements and automatically charges them when they pick up and consume items.

“It’s pretty dystopian, but that’s how it works,” Aaron said.

Aaron, who has taken a leading role in the union effort, voluntarily transferred to the store after the other Manhattan Starbucks location where he was working was slated for closure. He took on the role of inventory support, a gig that requires him to wake up at 5 a.m. restock the Amazon grocery and plug the products into a virtual database.

Though in his former Starbucks store, he had been ambivalent about getting involved in the union, once he had been trained and found out how many new responsibilities he would be taking on without any additional compensation, he decided it was worth pursuing.

Though management suggested that his new role could lead to new bonuses or higher pay before making the move, these benefits never materialized, he said.

Though the lounge and grocery area is operated by Amazon Go, the store’s staff of around 29 members are all employed by Starbucks. The majority of the employees work at the coffee bar and traditional Starbucks responsibilities with more of an emphasis on mobile orders. But the model introduces three new positions: hot foods and concierge in addition to inventory, which are siloed from the rest of the staff.

These positions initially presented a challenge to organizing because they were designed to do work with automated features of the restaurant or located in parts of the store where that minimized interacting with co-workers, but Aaron said he and two other members of the organizational committee slowly started holding one-on-one conversations with his co-workers after work about unionizing, and found a receptive audience.

“Especially at this store, people were waiting to have somebody reach out about the union,” he said.

The organizers decided to go public and file for a union election after they got 70 percent of the store to sign union cards. The store has not yet received an end date for its union election.