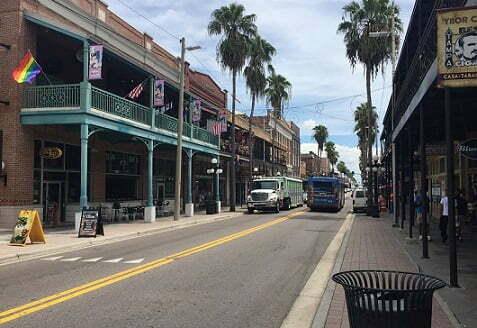 TAMPA (WFLA) – At almost any given night in Ybor City, tours offer to tell you about the spirits from around Tampa Bay. These ghosts tend to become more active this time of year as the tales of their haunts are reported.

You see, Tampa Bay has its share of ghostly tales – and not just during the holiday time. The City of Tampa was called “the damnedest city this side of Hell,” but that was more because of rum runners and bootleggers than it was for other spirits.

Some of these haunted locations are rated among the best in the country.

Ybor City is a historic downtown Tampa neighborhood founded in the late 1800s by cigar manufacturers. Today there are shops and nightclubs lining the brick street, but there is still a feeling of stepping back in time.

It has a long history of haunted happenings, including ghosts of soldiers who died in 1908 during the great fire.

1. But probably the most haunted location is the Cuban Club. It was built in 1917 with a ballroom, cantina, library, bowling lanes, pool and two-story theater.

There were two deaths dating back to the 1920s. An actor died by suicide on stage and a member of the board was murdered during an argument. They are said to still appear in the building.

But many reported seeing a lady ghost in a misty dress that comes down the stairs. Pianos will also play with no one around and the elevators run at odd times. Others said they see a young boy playing ball.

“One year I was setting up camera equipment to take prom pictures on stage! No one was around and all of a sudden the big door on the side of the auditorium started shaking then I heard noise above the stage! I slowly walked up the stairs and saw a shadow! At that point I decided to wait till later to finish setting up equipment,” Leary Short told WFLA.com.

The Travel Channel named the Cuban Club one of its Top 10 Most Haunted Places.

2. There is also a drunken Cuban ghost at the old Florida Brewery Company. It now houses attorney offices including the Swope, Rodante P.A. on East 5th Avenue, but the first night it opened as a bar, there was free beer. Of course, a fight broke out and a man was killed when he hit his head.

Now the drunken man can be heard talking in Spanish and walking around in the law firm’s building at night. The story is that he fought over a beer and still hasn’t let it go.

3. The Old Tampa Book Company at 507 North Tampa Street used to be a tailor’s storefront. The bookstore’s owners kept the chairs from the old shop and now they are said to move on their own. The owners also found a pair of bloody scissors on the floor.

Passers-by who said they took pictures of the shop see a man in a top hat and a woman who seems to be in pain.

Statues and gargoyles guard the 1926 Tampa Theatre at 711 North Franklin Street. Foster “Fink” Finley, who spent 20 years as the theater’s projectionist, died and never left. Staff members hear doors slam, and the power turns off without anyone around. They hear his footsteps and chains rattling in the hallway behind the stage.

Rosa Rio, who played the organ until she died at 107, may still be hanging around, too. A theater manager accidentally stepped back into the orchestra pit. She should have fallen directly on top of the organ, but the manager said that Rosa guided her fall so as to not damage the instrument. Some still hear organ music and believe Rosa continues to play today.

“People in the lobby have heard keys rattling up here like someone is trying to find the right key to fit into the lock,” said Witecki.

One of the most intriguing haunts, however, is contained to a single seat – number 308 – where a man has been seen wearing a fedora.

“I have always questioned the validity of that story until we had some of our paranormal investigators come in and spend some time in that area of the building and they captured all kinds of interesting things. Both video and audio lead us to believe there is someone in seat 308,” said Witecki.

Read more about the Theatre ghost.

5. Plant Hall at the University of Tampa at 401 W. Kennedy used to be the 500-room Tampa Bay Hotel. It was built by railroad tycoon Henry Plant in 1891 to accommodate passengers traveling to South Florida. Theodore Roosevelt, the Queen of England and Babe Ruth stayed there. The hotel operated until 1930. The building is still open and safe – but UT students have reported seeing an apparition from the windows outside. The servants are said to haunt the science wing.

A ghost known as “The Brown Man” who is said to have glowing red eyes haunts Plant Hall. Some say it is Henry Plant himself, wearing his brown suit and has long white hair. Word is that if anyone acknowledges his presence, he’ll rush up to their face and then disappear. Professors and staff said they avoid making eye contact with him.

There have also been visions of a tall gentleman in bib overalls and work boots pushing a janitor’s cart through the museum’s hallways. And students are reported to hear someone joining them in a classroom: an open door, the sound of footsteps in the room and someone sitting down, only to turn around and find no one there.

6. The Sunshine Skyway Bridge that crosses the Tampa Bay region is considered to be haunted. The 5.5-mile bridge connects St. Petersburg in Pinellas County and Terra Ceia in Manatee County. The current bridge was dedicated on Feb. 7, 1987.

Many things have happened to the bridge over the years. The previous Sunshine Skyway Bridge was hit by a freighter in 1980, collapsing part of it and taking several cars and a Greyhound bus into the bay. Thirty-five people plunged to their deaths. Only one man survived. The ghost bus is seen by folks visiting the fishing pier, which is part of the old bridge. Many said they feel an actual breeze and even catch a whiff of the gasoline from the moving bus.

More than 200 people have jumped from the highest point of the Skyway to their deaths. And some motorists report “a weird unexplained light phenomenon” in the water under the bridge.

The best story is that late at night, motorists have slowed down and some have even stopped to help what appears to be a woman standing alone on the bridge. She has a history of climbing into cars before disappearing from the passenger’s seat.

Tollbooth workers and motorists would see the woman hitchhiking around midnight. Many motorists picked her up and expressed the fact that she becomes extremely nervous in the car, wanting to get to the other side. But she would vanish soon afterward.

Employees and guests see the ghost of owner Thomas Rowe and the love of his life Lucinda. The couple met in London but her parents split them up and sent her back to Spain. Thomas returned home and never saw her again. He built the pink palace to look like one where they met. He died in 1940 and now they can be seen walking hand in hand on the beach.

8. The Britton Theatre in South Tampa on Dale Mabry Highway is an old movie theatre that is still open. Both employees and guests have reported unusual occurrences, even though no one died there. Doors in the ladies’ room will shut and lock and toilets flush when no one is there. Voices are heard in the hall near auditorium No. 5 late at night. An usher heard someone call his name in auditorium No. 3 and visions have been seen in the balcony.

If you have a ghost story you want to share, email cseitz@wfla.com.