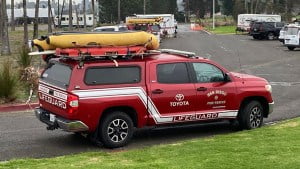 After generating some scattered drizzle, the unsettled atmospheric system out of the north began delivering steady showers to the county at around 8 a.m., according to the National Weather Service.

By late afternoon, the downpours had dropped up to an inch or so of moisture along the coast, nearly two inches in parts of the inland valleys, as much as four-plus inches in the mountains and around one-tenth of an inch in the deserts, the NWS reported.

Though no San Diego-area snowfall had been recorded as of 6 p.m., there was a chance of some arriving overnight in the upper reaches of the East County highlands, meteorologists said. Any that might come down, however, was not expected to stick around for long after reaching the ground.

The rain will likely continue off and on through midday Wednesday, the NWS advised. Thereafter, cool, dry conditions should prevail in the county through the weekend, followed by a possibility of more rain early next week, according to forecasters.