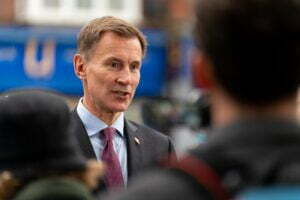 11:38am: Hunt says “stability, growth and public services” are his priority in consolidating £55bn of debt, making the recession shallower. Hunt said that his predecessor Kwasi Kwarteng was correct in identifying growth as a priority.

11:20am: Good morning and welcome to our live coverage of Chancellor Jeremy Hunt giving his Autumn Statement and how it affects small business. We will be covering the Chancellor’s statement as he delivers it this morning and update throughout with reaction from small business experts as it comes in.

What small business can expect from the Autumn Statement

The Chancellor is expected to include £24bn of tax rises and £30bn of public spending cuts when he delivers his Autumn Statement this morning.

Much of what the Chancellor plans to announce will be tax rises by stealth.

The largest revenue raiser is likely to be a system-wide freeze in the levels of allowances and thresholds affecting business owners for the next five years, including VAT, National Insurance and Capital Gains Tax.

Although no decisions have been fixed ahead of the Autumn Statement, the Chancellor is considering an increase in the headline rate of capital gains tax (CGT) and taxes on company dividends, which is how many self-employed small business owners pay themselves, as part of his plans to fill the £50bn hole in Government coffers.

Hunt has been warned that he must “think the unthinkable” to make up for the fiscal shortfall. This could include breaking the triple tax lock, a manifesto promise not to raise VAT, income tax or National Insurance over the course of this parliament. Officials recommended that he raise any one of the three taxes.

These would come on top of the Government increasing corporation tax on businesses to 25 per cent from April 2023.

Roger Barker, head of policy at the Institute of Directors, told the Financial Times: “This is going to give the impression that the government does not care about small businesses. The Treasury probably thinks this is a group that earns a lot of money, but small businesses are not big earners as a whole — and they have already been penalised during the pandemic.”

Meanwhile Tony Danker, director-general of the Confederation of British Industry (CBI), has warned that the Government needs not to just talk about growth but incentivise businesses to invest, otherwise he risks putting corporate Britain into “hibernation“.

When is the Autumn Statement?

The Autumn Statement is due to take place on November 17 at 11:30am.

The Chancellor is set to go ahead with the uprating of business rates and ignore calls for an extension of relief on the tax, which is payable on commercial properties.

From April, business rates are expected to be uprated by the consumer prices index measure of inflation, which as of September stood at a 40-year high of 10.1 per cent.

On top of this, certain sectors, including shops, restaurants, cafés, bars, pubs, cinemas and gyms, are benefiting from 50 per cent relief, which is due to expire on April 1.

The CBI published a report last week suggesting that the retail sector faces increases of up to 25 per cent over the next two years.

CBI director-general Tony Danker said the Government should look to alleviate the burden of business rates, which are set to cost companies an additional £3bn in April.

Danker warned not doing so would lead to lower investment and closures on the high street.

The Chancellor is preparing to hold the threshold at which businesses must register to pay VAT at £85,000 of turnover until 2026 – a stealth tax raid on small businesses which will force thousands more to pay VAT as he tries to balance the country’s books, according to the Daily Telegraph.

Thousands more small businesses would have to pay VAT for the first time as their turnover increases in line with rising prices.

However, according to the Federation of Small Business, close to a quarter of small firms see the VAT threshold as a barrier to growth. Instead, the FSB says the threshold should be raised to £100,000.

Capital Gains Tax (CGT), which small business owners pay when they sell their company, is expected to raise £15bn in 2022-23, or 1.5 per cent of all receipts. About 300,000 people a year currently pay CGT when they sell an asset for a profit.

Hunt is expected to lower the CGT-free allowance from £12,300 to just over £6,000, dragging tens of thousands in to paying the tax – a concept called “fiscal drag”.

The headline rates are tipped to stay the same. Founders currently pay 10 to 20 per cent when they sell out.

The government will mount a multibillion-pound raid on income from shares. The tax-free dividend allowance — which has already been reduced from £5,000 to £2,000 — is likely to fall to £1,000.

Some point out that taxes on company dividends mean double taxation for self-employed sole traders, as they already pay tax on company profits before the taxman dips its fingers into dividend income.

Basic rate income taxpayers currently pay 8.75 per cent on dividends earned above the current £2,000 allowance, while higher rate payers pay 33.75 per cent, and for additional-rate taxpayers the levy is 39.35 per cent.

The dividend tax rate could rise by another 1.25 per cent.

The move will hit two million small companies that pay primarily in dividends.

Craig Beaumont, chief of external affairs at the FSB, told the Telegraph: “The rise as mooted is another deterrent to becoming an entrepreneur. Owner-managers who pay themselves through dividends were largely left out of pandemic-era income support schemes.

“Economic recovery will depend on entrepreneurship. Disincentivising this group in yet another way would be a short-sighted move from the new Chancellor, himself a former entrepreneur.”

Under the current rules no tax is paid on dividend income below £2,000 but the Chancellor is mulling halving the allowance to £1,000 or even cutting it altogether.

If the dividend allowance is cut to £1,000, then a basic rate taxpayer would end up paying £87.50 more in tax, according to wealth manager Quilter.

Scrapping the £2,000 tax-free allowance would raise £1bn for the Treasury each year, according to think tank the Institute for Public Policy Research.

Scrapping the allowance completely would see a basic-rate taxpayer charged £175 in tax on their dividends, would cost a higher-rate payer £675 and an additional-rate payer £787, according to the think tank.

Combined with removing the allowance, the IPPR estimates this would generate £6bn for the Treasury every year.

Companies have to pay 13.8 per cent in National Insurance contributions on earnings of all workers over £9,100 per year. The Government is planning to freeze this threshold until 2027-28, meaning companies paying more over the coming years for every person they employ.

The Chancellor is expected to make research and development tax credits less generous following a rise in claims in recent years. The R&D tax credit scheme is meant to incentivise small and medium-sized businesses to innovate. In the year to March 2020, £7.4bn of support was claimed via 85,900 claims through the programme, an increase of 16 per cent from the previous year thanks to more claims from small businesses. The Financial Times reported that the Treasury fears that without reform, the small business scheme alone could cost the taxpayer nearly £9bn by 2027.

Hunt’s predecessor Kwasi Kwarteng announced in his mini-Budget that the UK would be establishing 200 investment zones with holidays on business rates and employers’ National Insurance contributions for new workers earning less than £50,000 a year. The investment zones would have cost Government £12bn a year in lost tax revenue.

The post Autumn Statement what it means for small business appeared first on Small Business UK.