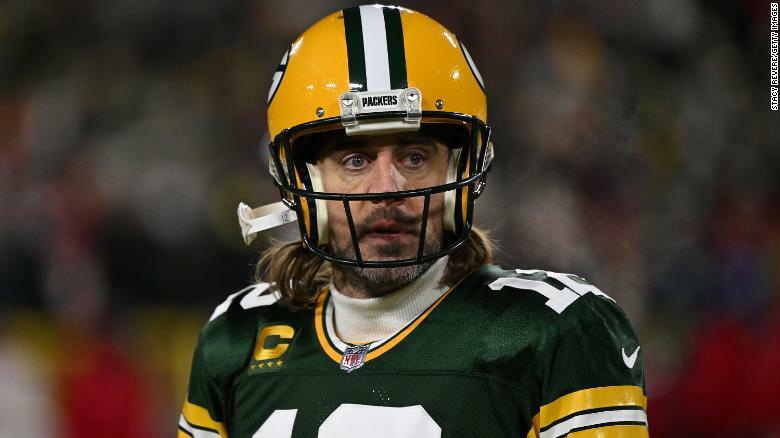 Aaron Rodgers has apologized to his “loved ones” who got caught “in the middle of” the attention directed at him after his Covid-19 comments earlier in the season.

In November last year, Rodgers missed an NFL fixture due to Covid-19 protocols. The Green Bay Packers quarterback later confirmed he was unvaccinated and had been taking advice from podcast host Joe Rogan on how to deal with a coronavirus infection.

He said after that the media was on a “witch hunt” to find out which players were vaccinated and blamed reporters for him saying he was “immunized” back in August. Rodgers said if any reporter would have asked a follow-up question, he would have explained he’s “not an anti-vax flat earther,” but that he’s a “critical thinker,” as well as saying that he “never wanted to be a divisive, polarizing figure.”

Appearing on his usual slot on the “Pat McAfee Show” on Tuesday, Rodgers apologized to those who got caught up in the reaction to his comments.

“One thing that I am sad about and definitely apologetic is I didn’t realize in the midst of the Covid conversations how much my situation was affecting my loved ones and my people,” he said. “The people that support me and love me and check on me and take care of me.
“I didn’t realize the kind of shrapnel that was kind of being flaked off of what I felt like were the bullets coming at me because I was too locked in on me and defending myself and trying to get a message out.”
Rodgers added: “So many people stepped up to the plate and sent me great messages of support and love. But I think I realized being out of this now and having conversations with some of those people, and understanding kind of the entire gravity of the situation I was thrust into and decided to speak on multiple times had an effect on a lot of people.

“To those people, I just say I’m sorry. I never meant to get you in the middle of it, but you got into it by proxy because of your relation to me.”

Rodgers is coming off an excellent season at quarterback. Earlier in February, the 38-year-old was named the NFL’s Most Valuable Player for the second year in a row — the fourth time he’s won the award in his career.

However, the season ended in disappointment for Rodgers and the Packers having been dumped out of the playoffs by the San Francisco 49ers in a shocking defeat.

The underwhelming manner of the playoff loss and the rumors of discontent from Rodgers emanating from last offseason has led to questions about his long-term future in Green Bay.
And an Instagram post from Monday titled #MondayNightGratitude only put fuel to those flames, as he thanked his teammates, coaches, fellow quarterbacks at the team, as well as his former fiancée Shailene Woodley.

But speaking to former Indianapolis Colts punter McAfee, Rodgers said he’s not made a decision yet on his future.

“There will be no news today, no decision on my future,” he said, going on to say that his future is not all he’s thinking about.

“The offseason kind of begins when your season ends on paper, but it really starts to begin once the Super Bowl is over.

“And you start to think about the next season, and for me, my future. And so, there’s definitely been some contemplative days.”