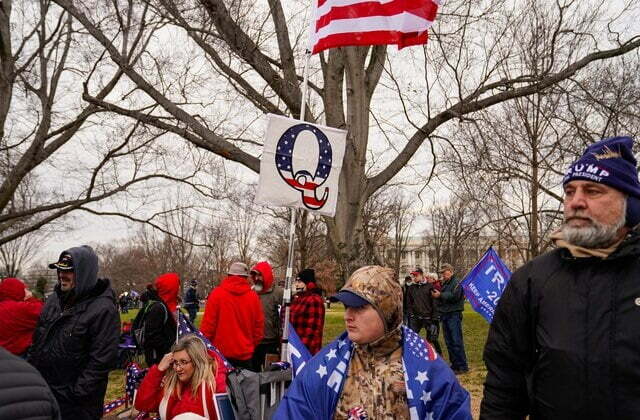 Americans who most trust far-right news outlets are nearly five times as likely to believe the central views of the conspiracist movement, a study found.

Here’s a theory: Satan-worshipping pedophiles running a global sex-trafficking operation control the U.S. government, media and financial institutions. A storm is coming to sweep away the elites and restore the rightful leader of the country. And things are so off track, true American patriots may have to resort to violence in order to save the country.

It’s a pretty out-there view of the world, acknowledges Natalie Jackson, a researcher with the Public Religion Research Institute, which surveyed Americans on the central views of the conspiracist QAnon movement.

But a quarter of Republicans agree with those sentiments, according to a PRRI report released Thursday that was based on data from four separate polls it conducted. So does 16% of the population as a whole – or, Jackson notes, about 44 million people.

The group, which studies the intersection of politics, culture and religion, didn’t ask people outright if they are subscribers to QAnon, the group that passed around a bizarre accusation in 2016 that Democratic leaders were involved in a pedophile ring operated in a pizza joint in Washington, D.C. Instead, PRRI asked Americans if they agreed with the core tenets of the group – and quite a few did.

“I don’t think any of us thought we would write a question in one of our surveys about the U.S. being controlled by a bunch of Satan-worshiping pedophiles,” Jackson says. But the persistence of the conspiracy-driven group – along with the conviction and sentencing of QAnon “shaman” Jacob Chansley for his role in the Jan. 6 insurrection at the U.S. Capitol – means such queries are not themselves too out-there.

Republicans were more likely to agree with the central beliefs of QAnon than Democrats (9% of whom align with the group’s tenets) or independents (14% of whom subscribe to QAnon’s beliefs).

There was little difference among people by age or religion, the report found. Instead, “Even when controlling for partisanship and ideology, media consumption is the strongest independent predictor of being a QAnon believer,” the report said.

Jackson ascribes the trend – which has not abated since Donald Trump left office – as the product of a diminished trust in major American institutions.

Polling by other operations has found that Americans’ faith and trust in a wide array of institutions has waned. Gallup, which has a running survey of Americans’ confidence in institutions, reports low levels of trust in the media, government, big business, the criminal justice system, the Supreme Court, organized religion and public schools. The military and the police are two institutions that still enjoyed majority support in 2021, Gallup found.

There are party divides when it comes to trusting institutions, as well. Polling this month by Morning Consult finds that the most polarizing institutions are the U.S. government and the news media. Fifty-nine percent of Democrats have faith in the U.S. government compared to 32% of Republicans who share that view. When it comes to the news media, 57% of Democrats say they trust the institution compared to 20% of Republicans who feel that way.

“It’s about a mistrust of society and institutions. People who are really disaffected and looking around and seeing a world they don’t recognize” are drawn to QAnon, she says. “They’re willing to entertain some really out-there theories about why the world looks the way it does.”

Jackson says the trends were stable during 2021 and not likely to change without a big recruiting effort by QAnon. But “even though it’s a small proportion of people, it’s still a lot of people,” she adds.