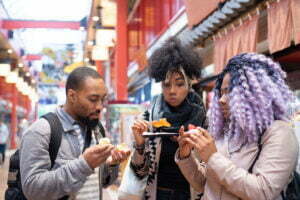 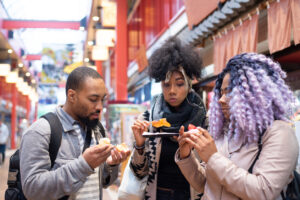 Besides the requisite Takeshita Street in Harajuku and Sensoji’s Nakamise Dori (staples on pretty much every Tokyo itinerary), here are five lesser-known shopping streets in Tokyo. Each one has its own unique character, for a local’s-eye-view of the city.

Under a sky devoid of power lines (having been removed in 2016), the charming Togoshi Ginza feels distant from the modern era and the swanky Ginza it borrowed its name from.

With shops cram-jammed full of miscellaneous items (known as zakka), from secondhand Le Crueset pots to pre-loved jewelry, Togoshi Ginza is a place of hidden treasures. The retroism even extends to the food and beverages, like Togoshi Ginza’s Milk Shop which sells Meiji milk and dairy products in classic glass bottles and even does home delivery within the Shinagawa ward.

After an afternoon of thumbing through old records and other bits and bobs from decades past, take a breather at Togoshi Hachiman Shrine, which has cozy couches as well as friendly and well-fed (no doubt a correlation there) shrine cats, tucked away in a residential area.

Yet another shopping street that adopted the name “Ginza” (in hopes of attaining its namesake’s prosperity), Yanaka Ginza is an old-school Tokyo shotengai with its own affiliation to cats. There are seven lucky cat statues placed along the street; some in plain view, while others gaze over the shopping street silently—so realistic that one might even mistake them for the real thing.

Back when stray cats started taking over the area, kitschy kitty-themed shops also made themselves at home in Yanaka Ginza. Now, souvenir shops and houseware stores beckon, promising goods both for cats and the people who love them. The feline obsession even extends to street food, like Yanaka Shippoya’s cat tail-shaped donuts with flavors such as banana cream and tora (tiger), which has stripes of cocoa and white chocolate.

The famous Yuuyake Dandan (Sunset Staircase) is located at the mouth of the shopping street and offers a view of the shops below through Yanaka Ginza’s iconic archway. And the nearby Yanaka Cemetery, famous for its wide, cherry blossom-lined pathways and sprawling grounds,  is a peaceful place for a bike ride or stroll to help digest all the shotengai street foods that you no doubt indulged in.

On a rainy day, Nakano is the place to take shelter while meandering along the covered shopping arcade Nakano Sun Mall and the adjoining shopping complex Nakano Broadway.

Starting out at the north exit of Nakano Station, the 224-meter-long Nakano Sun Mall houses restaurants, cafes, clothing stores and more. Right at the entrance from Nakano Station, you’ll find Oyakidokororefutei Nakano which sells warm-from-the-pan imagawayaki, a type of stuffed pancake that’s often filled with red bean or custard. Their sweet potato flavor is a favorite, with a melt-in-the-mouth filling that’s both hearty and autumnal, branded with a cheerful character in the shape of the main ingredient.

Where Nakano Sun Mall ends, Nakano Broadway begins. A collector’s paradise, the retro mall features shops selling manga, electronics and pop culture paraphernalia to rival Akihabara. Mandarake is one such prominent retailer with several stores in Nakano Broadway, each specializing in a different niche, from Gundam merchandise to cosplay.

After getting its start as a black market in the years post World War II, now Ameya Yokocho (a.k.a. Ameyoko) is a bustling marketplace for everything from fresh seafood to dried spices to clothing to snacks and candy. Some say that Ameya Yokocho means “candy store alley,” while others say the “ame” in its name refers to “America.” Regardless, discount candy deals can still be found here alongside an abundance of camo-patterned gear and flashy sukajan (souvenir jackets).

The local restaurants and shops can’t contain the excitement and hubbub of Ameyoko, with streetside tables spilling out of izakayas, while revelers snack on portable morsels. Dining al fresco is the way to go here. To escape the crowds, we recommend picking up some items to go for a picnic spread at the neighboring Ueno Park.

I’ve been told I have the taste buds of an obaachan (granny)—maybe it’s my affinity for the sweet red bean paste anko—so it’s no wonder that Sugamo, the cheekily named “Harajuku for old ladies” holds such charm for me. Offering little-known snacks like nure senbei (literally “wet rice crackers”) from Raijindo and more traditional wagashi (traditional Japanese sweets) like the anko-stuffed shio daifuku (salted mochi) from Mizuno, Sugamo’s Jizo-Dori shopping street teems with good eats.

Along the way, you’ll find Togenuki Jizoson Koganji Temple, which is the go-to place to pray for relief from your ailments (togenuki meaning “thorn removal”). Also, keep an eye out for shops selling lucky red underwear—though we’re pretty sure you won’t miss these scarlet beacons!

Full of charm, heart and tasty street food, discover the individual character of each of these Tokyo shopping streets; revisit them like old books and you’re sure to find even more to love.