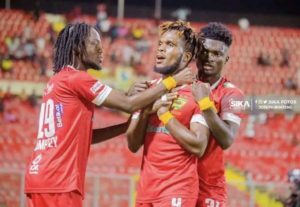 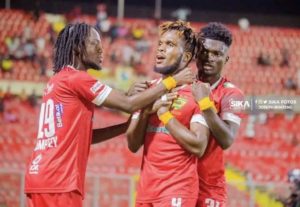 Asante Kotoko striker Steven Dese Mukwala has expressed his happiness after scoring his first competitive goal for the club in their 3-0 win over King Faisal on match week four of the Ghana Premier League on Monday.

The Uganda international was adjudged Man of the Match following his impressive display for the Porcupine Warriors at the Baba Yara Sports stadium.

The win lifts Kotoko to 5th spot while King Faisal remain at the bottom after four consecutive defeats.

“A perfect night in Kumasi 💪, the porcupine Warriors🔴 were Amazing🔥⚽goal to the faithful who believed in the Process . Thank you 🙏” he posted on his Twitter page after the game.

A perfect night in Kumasi 💪, the porcupine Warriors🔴 were Amazing🔥⚽goal to the faithful who believed in the Process . Thank you 🙏 #M9 #AKSC #FabuCensus pic.twitter.com/dNvwKwrVB5

Mukwala opened the scoring for Kotoko in the 11th minute of the game.

He was involved in the second goal as he was fouled in the box 17 by King Faisal goalkeeper Abdul Jabal in the 28th minute. The referee pointed to the spot and captain Richard Boadu expertly converted to double Kotoko’s lead.

After the break, goalscorer Mukwala turned provider. He assisted Nicholas Mensah’s goal in the 46th minute.

Asante Kotoko will take on Bechem United on match week five of the Ghana Premier League.

Mukwala has made three appearances, scored one goal and provided two assists for Asante Kotoko in the league this season.