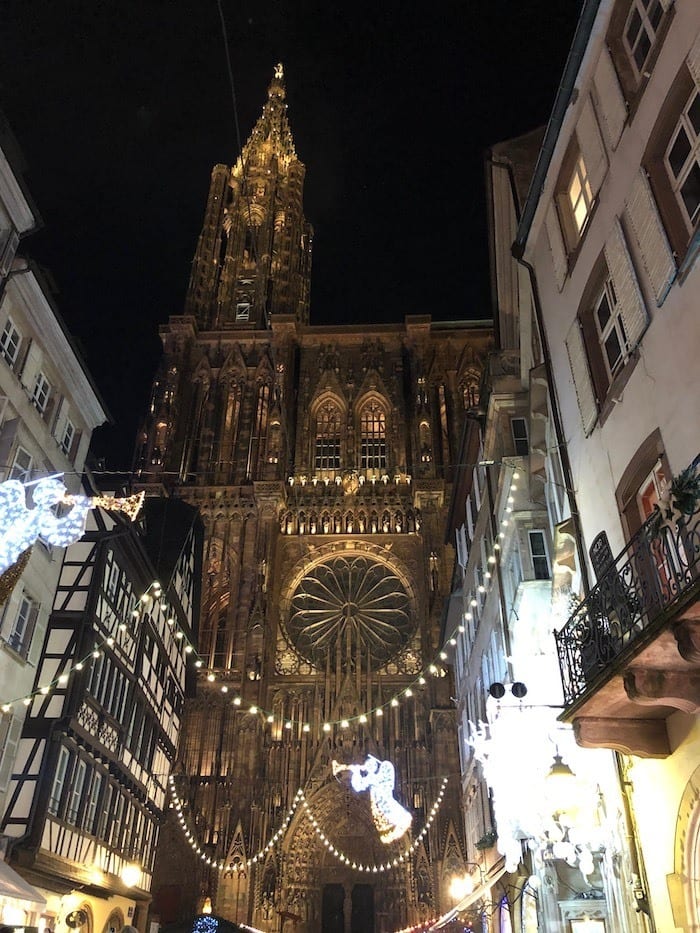 Paris is one of the top three travel destinations in the world, yet visitors to France often spend their entire vacation without going further than the 20th arrondissement. But if you don’t make it out of Paris and into the Alsace region, you will miss out on exploring the charming town of Strasbourg, France’s very own Capital of Christmas. It is a pity because there are so many things to do in Strasbourg, no matter what time of year you visit.

Strasbourg is located near the Rhine River in France’s far east and is one of the best places to visit in France for families. A stone’s throw away from the German border at Stuttgart, Strasbourg has gone back and forth between France and Germany several times over the past few centuries.

The city’s multi-national history provides a really interesting cultural dynamic. Strasbourg’s architecture, art, and cuisine give the city a unique ambiance that draws on its French, German, and native Alsatian roots.

Strasbourg merits its own dedicated visit, but thanks to the city’s convenient location on many major European railway lines, it is possible to make Strasbourg either a day or weekend trip from Paris—just two hours away on the TGV train.

Things to do in Strasbourg, France

Strasbourg’s most well-known landmark is its massive Cathedrale Notre Dame de Strasbourg, located in the center of the Grand Île (an island surrounded by the Ill River on one side and a canal on the other). Just standing outside of the Strasbourg cathedral to gawk at its stunning Gothic architecture is worth a few minutes of your time on your first day in the city.

It is possible to go inside the Cathedral, although it is a gloomy stone interior, typical of European cathedrals. However, the rose window is pretty stunning.

Also located inside the cathedral is Strasbourg’s famous astronomical clock, adorned with beautifully crafted historical and mythical figures. It once served as the official clock of Strasbourg.

The astronomical clock queue is separate from the rest of the cathedral— the line begins on the Southern side of the cathedral (near the right transept.) The clock can only be viewed at certain times of day (this was around noon in the winter, but this is likely to change seasonally.)

There is also a small fee to view the clock. I understand that it is possible to ascend the cathedral tower which provides a beautiful, panoramic view of Strasbourg, but the tower wasn’t open when I visited just after Christmas. However, Rue Mercière provides an excellent view of the cathedral façade.

Located across the plaza from the southern side of the cathedral is the Palais de Rohan, built in the mid-1700s for one of the Prince-Bishops of Strasbourg. Constructed in a beautiful French style reminiscent of lavish Parisian mansions, the interior is furnished like a palace.

If you are interested in medieval and renaissance Catholic history and relics, the Museum Oeuvre Notre Dame provides a stunning collection of stone statues and other religious art in a massive but well-designed museum inside of a beautiful complex with a courtyard.

To the south of the cathedral and its surrounding attractions is the Petite France neighborhood, an area of Strasbourg with shops and restaurants housed in some of Strasbourg’s gorgeous, old, half-timbered Alsatian houses. The neighborhood is situated on the River Ill, and it is a beautiful place to go for a stroll, to shop, or to eat.

Many of Strasbourg’s other highly recommended restaurants are located on the same street (Rue du Bain-aux-Plantes) in Petite France, including Maison des Tanneurs, L’Oignon, and Chan Chira. La Petite France is a great place to buy Strasbourg’s famous pain d’epices (which translates to lebkuchen in German and gingerbread in English although it’s not exactly the same thing) during the Christmas season.

Further south and west in Petite France is the Barrage Vauban, a dam that spans the Ill River. The dam lies just beyond Strasbourg’s famous Ponts Couverts, a beautiful stone-covered bridge with several towers. The dam has a viewing platform on top which gives a beautiful view of the bridge and the rest of the Grande Ile.

Located between the cathedral and Petite France is the city’s historical museum, located in yet another one of Strasbourg’s impressive, old-timbered houses that used to serve as the city’s slaughterhouse.

The interior has interesting exhibits on the city’s history, including sections on the different religions that have flourished in Strasbourg over the years. While Alsace is primarily Catholic, it is home to many Protestant communities that grew in the region post-Reformation. Alsace, along with Germany’s neighboring state of Baden-Württemberg was also where the Rhineland Jewish community developed almost a thousand years ago.

Practically all of Europe’s Jewish culture originated from this region before the mass migration of European Jewry to points east. The museum also exhibits traditional dress and other historical artifacts from Strasbourg and Alsace from the past several hundred years.

The Rue du Vieux-Marché-aux-Poissons, which runs from the River Ill through the center of Strasbourg, is an excellent street for shopping, eating, and architectural sightseeing. Many of the Christmas markets in Strasbourg are located on or near this street.

If you are looking for broad, European plazas with pretty houses, storefronts, and cafés, Strasbourg will not disappoint! Just a couple minutes’ walk from the cathedral is the Place Gutenberg. The expansive plaza is another great place to gawk at Strasbourg’s beautiful French-German-Alsatian architecture. The square is home to a statue of, you guessed it, Johannes Gutenberg, who lived in Strasbourg from 1434-1444.

A few minutes north of Place Gutenberg up Rue des Grandes Arcades is Place Kléber, which honors a famous 17th-century Strasbourg figure with a statue in the center of the plaza. The plaza often hosts farmer’s markets (even in wintertime).

Located on the square is the Aubette 1928, a grand, French-style edifice that is now home to a museum with contemporary art and a planetarium. Just off of the square is the Galeries Lafayette, one of France’s most famous department store chains and a good place to do more high-end shopping.

Strasbourg is far less touristy than Paris—even when I went at Christmas time— but the few crowds in Strasbourg really thin out after you walk behind the cathedral. Continue walking along Rue des Juifs and you will cross the canal into the newer part of Strasbourg.

To the left is the Jardin de la Place de La Republique and the Palais du Rhin. Farther north and east is the Parc de l’Orangerie, a beautiful, expansive green area. It is a lovely place to take a walk or go on a bike ride, and there are many family-oriented things to do and see within the park, including the zoo, a playground, and a dog park.

Just north of the Orangerie is a massive complex where the European Parliament, the Council of Europe, and the European Court of Human Rights, among other organizations, are located.

It is possible to tour the inside of these sites. Entrance to the European Parliament is free of charge but is offered on a first-come, first-served basis. Check to see whether or not the parliament is in session when you visit. Visits to the Council of Europe must be booked in advance. Visits to the European Court of Human Rights are generally only open to special groups (like law students) and should be booked several months in advance.

Getting to and from Strasbourg is quite easy. The main train station is located very close to the Grande Ile. Trains run frequently to major European cities and railway hubs, including Paris, Frankfurt, Stuttgart, Brussels, and Basel, as well as to local destinations in Alsace, Lorraine, and southwestern Germany, including Colmar, Mulhouse, Haguenau, Metz, Baden-Baden, Offenburg, Karlsruhe, and Freiburg.

Strasbourg also offers wonderful accommodation options, like Hotel Hannong near Place Kléber. The hotel has an old, beautiful interior but very modern rooms. Hannong is attached to a great bar, and the hotel breakfast (not complimentary but so worth it) is divine.

Strasbourg is such an underrated city. So go! The architecture is beautiful; there is a proliferation of great museums and beautiful areas to walk, the shopping and restaurant scene is impressive, and you won’t have to fight crowds like you do in Paris.

Find a Hotel in Strasbourg:

PIN THIS FOR LATER

Today’s guest post is written by Max Levine. Max has been traveling ever since he can remember with his family. In recent years, he has been the one who plans vacations for his family and for himself, from researching airfare and railway tickets to crafting itineraries. Max has traveled a lot both in the US and internationally. He has also developed a penchant for writing. Max hopes to continue pursuing opportunities to travel and write both in college and beyond that. All photos by Max Levine.

The post 11 Best Things to do in Strasbourg, France in 2 Days or Less appeared first on We3Travel.